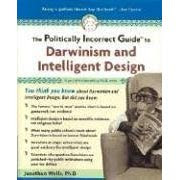 This is the book I just finished reading. Personally, I thought it was a good, persuasive read, written more in the language of the common person rather than the thick, almost incomprehensible sludge of the researcher. By contrast, I'm still trying to work my way through this tome. Mr. Dembski does have a lot of interesting points, but my goodness, it takes some effort to get to them.

However, if you go to Amazon and read the reviews for the above book, you would be surprised by the vitriol and outright personal attacks posted. Some of the "reviews" are titled thusly:

"Intellectually Dishonest and Logically Fatally Flawed"
"Boring, Old, Redundant"
"Political and Incorrect Nonsense"
"A Designer is Not An Answer"
"The Reactionary Right Strikes Again"
"Science Through a Public Relations Campaign"
"Amazing!! But Only in the Worst Way"
"Just More Creationist Dishonesty"
"Lying to the Choir"
"Pseudoscience At Its Finest"
"My Mom's An Idiot. So is Jonathan Wells"
"Silly Close Minded Creationist. Science is for Thinkers"

And so on and so forth.

However, the most irritating, irrelevant "review" is the third one listed. This review doesn't talk much about the book at all, in terms of actually rebutting what it says; instead the author uses his space to attack people of faith, and paint them as subhuman imbeciles. He posts some studies (no links provided, conveniently) that purport to show religious people to be less intelligent.

The studies range from 1927 to 1980. Aside from the suspicious fact that there is no more current information, it seems to me that the earlier studies, especially, would be products of their era--that is, rife with prejudice. The first study states baldly that religiously conservative students "are, in general, relatively inferior in intellectual ability."

Excuse me? Besides not providing a definition of "religiously conservative," this seems to be the sort of sweeping generalization that a good scientist should be avoiding. Since I could not read the study for myself, I could not see whether actual IQs and/or GPAs were provided for study participants.

In any event, this sort of mean-spiritedness (another section of the so-called "review" states: "To be as blunt as possible, only a fool or someone hopped up on Jesus juice will find this book convincing, but then merely being a religious nut in the first place is a good indicator of low intelligence to begin with") does not belong in any sort of civilized discourse. I wonder if it would be acceptable to review a book written by a black person and post "studies" supposedly proving black people to be inferior in intelligence? Or review a feminist tome and post "studies" saying women are dumber than men?

If not, then Mr. N'krumah's "studies" should be regarded with the same kind of contempt.

Jonathan Wells makes the same sort of point in Chapter Seventeen of his book. The book is well documented (the endnotes take up forty-seven pages) and one of the links I followed led to this delightful article published in TCS Daily. In particular, I liked this section:

A reasonable observer might note that many ID advocates appear exceptionally well-educated, reasonable, and articulate; they might also note that ID advocates have pointed out many problems with the Darwinist catechism that even pro-Darwin scientists have been known to concede, when they think the Jesus-kissing crowd isn't listening. And yet, even in the face of a sober, thoughtful ID position, the pro-Darwin crowd insists on the same phooey-to-the-boobgeois shtick that was tiresome in Mencken's day. This is how losers act just before they lose: arrogant, self-satisfied, too important to be bothered with substantive refutation, and disdainful of their own faults. Pride goeth before a fall.

Durned tootin. Sometimes how you say something is just as important as what you say. A bit of humility goes a long way in getting people to listen to you. Too bad the above "reviewer" didn't take that into consideration.

In any case, I would recommend this book. I am in the process of finding other ID books to read, and I will report on them periodically.
Posted by Unknown on 5/12/2007

It's been my experience (I grew up in an academic enviroment) that people who attack Believers do so out of hatred, perhaps a horrible experience in their formative years, that sort of thing, rather than out of any real intellectual integrity. I have far more respect for the athiest who says God doesn't matter to them, and allows the believer their belief than I do the person who hates God and insults Believers.

Reviewing a review seems like a pointless exercise and obviously does nothing to establish the credibility of the book in question. Why not review the reviews of the reviews? Viz. and to wit:

Whowhee! I don't think that I can find a shovel big enough to handle all of this manure...

If evolution is fact, then pure evidence would be demonstrable and obvious; lies, tricks, distortions, failed experiments, tortured data, falsified images, yada yada yada, would not be necessary.

My cousin has a very high IQ and she's an idiot.

(In all fairness, the reviewer, Jimho N'Krumah, is hardly a paragon of restrained civility.)

At the end of the day, truth is an affirmative defense against incivility as well as libel. Evolution is is one of the most well-evidenced scientific theories. Intelligent design is trivially false when stated scientifically; when stated metaphysically it is a transparently dishonest attempt to cloak religious proselytization in the language of science to make an end run around the First Amendment.

As such there's really no other conclusion than to call belief that intelligent design is legitimate science prima facie evidence of irrationality.

Your criticism of the scientific information is even more puzzling. If you could not read the study, how do you know that it makes sweeping (presumably unsubstantiated) generalizations or does not provide a definition of "religious conservative"?

Your objection to the study seems to be only on the basis that it draws a conclusion you disagree with.

Furthermore, you seem to be confused about the nature of science: It is precisely the business of science to make sweeping generalizations—the more universal the better—and substantiate them according to the evidence.

BTW: In the spirit of intellectual integrity, I would note that rootietoot's comment describes not her experience, but rather a conclusion based on unspecified experiences. And apparently we're to take her academic upbringing as establishing some sort of authority for her conclusions in the complete absence of any description of the underlying experience.

In your opinion, sir, which I do not and will not accept.

Please do not come into my cybernetic living room and call me irrational. I would not accept it in my actual house, and I will not accept it here.

If you wish to comment on my blog, you must accept the following premise:

I am just as rational in my acceptance of God and/or Intelligent Design as you are in your denial of same.

If you cannot agree to this premise, please never darken my door again.

Your metaphor seems inapt: I don't know about your living room, but mine is not on display to (potentionally) a hundred million people, nor do I criticize people publicly by name and plead privacy to escape criticism.

Still and all, the rights of ownership trump the ethics of intellectual honesty, and I will respect your wish to refrain from further comment.