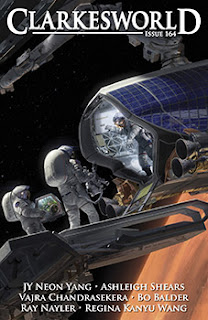 This cover's not as good as some previous ones, but the stories make up for it.

This is a funny/tragic story about bots trying to hide their owner's death by showing off the decomposing body (who died of natural causes, not machine murder) to keep from being evicted and shut down. Definitely macabre humor, if you're into that sort of thing.

An interesting hard SF story about a colony teetering on the edge of extinction, and how the protagonist tracks down the cause and comes up with a solution. Nice exploration of the scientific method.

"A Stick of Clay, In the Hands of God, is Infinite Potential," JY Neon Yang

This novelette is the star of this issue. It features interstellar kaiju--"holy mechs"--on a holy war, hunting down apostates, and the pilots who eventually come to question their beliefs and everything they've been taught. As a side note, this story tackles some of the issues of the "Attack Helicopter" story (see here) and does it a helluva lot better.

I didn't like this story much the first time I read it, and looking it over a second time, I pinned down the reason why: the stereotype of the obsessed, manipulative mother, seeking to control her son into adulthood and through the titular "language sheath" many other people as well. Really? Come on, we can do better than that.

A post-climate-change snippet of everyday life that gradually evolves into horror. This story is creepy as all get-out.