I had fairly high hopes for this show coming into this season, because the third season basically amounts to a reboot. This show was straitjacketed from the start by its original conceit, taking place ten years before the events of the original series, and the upheavals due to showrunners being fired didn't help. I think I liked the first season better than some (mainly due to Jason Isaacs and Michelle Yeoh, the latter of whom is clearly having too much fun for words), but I will readily admit this show has had more than its share of growing pains. The second season was a definite improvement on the first, despite their having to clean up the glorious mess of the first season. The main plotline for the second half of the season was yet another maniacal artificial intelligence threatening to destroy humans and all sentient life in the galaxy (seriously, that well is more than drained and dry, it's collapsing in on itself), and the only solution was to send Discovery nearly a thousand years into the future to save the galaxy. (Except that in the last few minutes of the final episode, Michelle Yeoh, with her mad martial arts skills, destroyed the AI Control, so Discovery didn't really have to go, but they went anyway....) Most of the people I know who like the show approved of this move, as it freed the show from the constraints of canon and enabled it to chart its own path. (And for those who still want a TOS-era show, we're going to get Strange New Worlds, with Pike! and Number One! and Young Spock! which I am jumping up and down for.)

Now we've arrived nine hundred and thirty years in the future, and it's time to see what has been wrought. 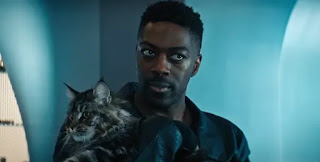 This is the new character introduced in this episode, Cleveland "Book" Booker (and his cat, Grudge). After a brief but intriguing opening scene showing a man in a space station (with alternating red and blue holographic alarm clock parrots) getting up day after day and sitting at a desk searching for....something, we're thrust into the middle of a madcap space battle. Book is trying to leave the planet below, attempting to outrun someone named "Cosmo." (When I saw this Cosmo person, I thought, "Is this an example of a future Klingon?" Because I swear, the makeup looked like leftover first-season Klingon prosthetics.) They are interrupted by Michael Burnham screaming out of her wormhole in her tritanium time-travel suit, colliding with Book's ship and catapulting both of them to the planet below. She manages to reboot just before she lands and thus doesn't become a red smear on the side of a volcanic cone (I read the exteriors for this episode were filmed in Iceland, and it's gorgeous). After she determines that there is, in fact, life on this planet and Control didn't destroy it all--meaning she and Discovery succeeded--she sends the suit back through the collapsing wormhole to give Spock the final signal and self-destruct. Then, with only her emergency pack, she limps off to the place where Book's ship crash-landed.

Their initial meet-cute is first a fight and then a wary standoff. Book is convinced Michael has come to take his cargo, and she in turn is trying to convince him she isn't going to do that, but just needs to contact her ship. Book takes her on board his ship (I don't think I heard a name) where, after showing off his huge cat, he explains to her just what damage their collision did. He has to go to this planet's capital city to trade for more dilithium. Burnham says she will give him her "antique" tricorder if he takes her to a place with comms, so off they go.

On the way the first major plot reveal of the new season is dropped: the Federation is no more, collapsing more than a century ago due to nearly all the dilithium in starships suddenly going kablooie, an event called "the Burn." Book doesn't know why. Needless to say, Michael is stunned by this news. This is a very well acted scene, with Sonequa Martin-Green just killing it with her facial expressions: from shock to despair to acceptance to determination, all in a few seconds. Her performance throughout this episode is good, but this scene stood out.

When they reach the planet's capital city, Requiem, they barter at a grungy-looking place run by Andorians and Orions. Book betrays Burnham (he's a bit of a rogue at the beginning of the episode, though he softens up later) and she is interrogated by the head Andorian and Orion shooting her with babble gas. This is another good scene, and Martin-Green obviously had a blast doing it. She pelts her captors with run-on sentences and unbelievable (to them) facts, and finally reveals that Book has something time- and temperature-sensitive on board his ship, although Burnham calls it "ice cream." The two mob bosses go after Book, who in the meantime has been collared by Cosmo. Burnham and Book team up to fight their way out of this mess (Burnham seizing several small chunks of dilithium crystal along the way), and there follows a rip-roaring, inventive chase sequence utilizing the new technology of personal transporters (which take 30 seconds to recharge after each jump) across the lovely Icelandian landscape. The two finally fall off a cliff into a lake below, which delays their pursuers for a while.

The episode slows down at this point, to reveal some of Book's backstory. He has some kind of mental or empathic connection with plant and animal life, as demonstrated when they're sitting by the lake and he goes into a meditative state and pulls a water plant to the surface, squeezing a substance from it to put on Burnham's wound to prevent infection. He lets Burnham use his personal comm to try to contact Discovery with no answer. Also, by this time he has guessed that she is a time traveler, and she confirms it.

Finally reaching Book's cloaked ship, the two are caught. The Andorian demands the decloaking code, and we get to see just what is aboard Book's ship--a 30-foot-long monster called a "trance worm," which hunts its prey by staring it in the eye and immobilizing it. (Book helpfully tells Burnham to close her eyes as the beast charges.) The trance worm roars and chows down on everyone there. It also swallows Burnham, but Book quickly speaks to it in that alien language of his, persuading it to vomit her back out--which the beast does, although she's covered head to toe with what must be the digested remnants of the worm's previous victims. (Gah. That was a bit yucky.)

Come to find out, Book is not a smuggler, but couriers endangered species to safe planets where they can be released and thrive (since the Federation is no longer around to protect them). He takes the trance worm to a sanctuary planet and releases it. When Burnham says she has to search for her ship but she doesn't know where to start, Book says he knows someone who can help--and takes her to an old, decaying Federation relay station, where the man we saw in the first scene has been holding court for 40 years, waiting for someone to come.

The long-range sensors have failed, and the man at the relay station does not know what, or if, anything remains of the Federation. He asks Burnham to give him a commission, and she does, appointing him her "acting communications chief." He also pulls out the Federation flag that his family has held for generations, and they hang it on the wall. The episode ends there, with the promise of Burnham and Book searching for Discovery, and then striving to rebuild the Federation.

This strikes me as a very good template upon which to build the season. This episode has been generally well received, according to the other reviews I've skimmed. One thing I do hope is that Burnham and Discovery remain separated for at least a few episodes (which is what I suspect is going to happen, seeing that in the episode-ending season preview her hair is a lot longer, which would imply several months of elapsed time). This would open up an opportunity to explore the other characters, in particular the woefully neglected bridge crew.

With a stable showrunning crew and this new, virtually unlimited canvas to play with, hopefully Star Trek Discovery will finally live up to its potential. Its great strength has always been its cast and characters, and I'm crossing my fingers that we'll get some stories to match.