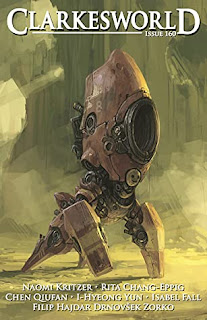 Now that I'm making a serious dent in my 2020 TBR pile, I thought I would include some magazine reviews as well. I have what I suppose is a near-fatal weakness for dead trees; I'm quite willing to pay extra to various Patreons to get a paperback copy in my hot little hand. (I'm also one of the few people to have a complete set of 2018 Apex Magazine paperback issues, during the single year they were offered--and now that Apex is resuming publication, I'd pay extra for them again, too.) Clarkesworld is one of my favorite SFF magazines. Neil Clarke is an excellent editor, and I very much appreciate his pairing with Storycom to offer translated science fiction, as he explains in this issue's editorial. One of these stories is my favorite in this issue.

"I Sexually Identify as an Attack Helicopter," Isabel Fall

I hesitated to include this story given the eruption it caused when it was initially posted; the author ended up asking for it to be removed from the Clarkesworld website. Coverage here and here. I'm not qualified to comment on the trans issues and reaction from the trans community, but I think I can opine on the story as a story. On that basis, I will say that I thought it was a muddled mess. Every time it started to get a little momentum, it would be derailed by a paragraph or six of meta commentary and fourth-wall-breaking questions on gender. I'm not objecting to these things as such; they might have worked if a) they had been shorter; and b) they had been more seamlessly woven into the narrative. As it was, I thought we ended up with a disjointed story that didn't know what it wanted to be--a piece of fiction or a polemic essay--and as a result failed at both.

This is the somewhat disturbing exploration of what turns a person into a monster, in the form of the protagonist Cecily Grantz and her high school friend Andrew. Andrew is a typical 80's nerd, misunderstood by his parents and picked on by his classmates, who begins to show a bent towards vicious revenge to anyone who wrongs him. He uses Cecily's gene-editing research to create a serum that gives people inhuman speed and strength--killing many of his test subjects along the way. After Andrew flees the US, Cecily hunts him down in China and takes care of him in a powerful plot twist, raising the question of--as much as we're not meant to sympathize with Andrew--just who is the monster here.

"The AI That Looked At the Sun," Filip Hajdar Drnovsek Zorko

An inventive tale of a machine (or subroutine, I suppose) sentience on the Daedalus solar monitoring station with one overwhelming desire: to use the available equipment--in this case, an EVA suit--to see the sun.

"The Last To Die," Rita Chang-Eppig

In a future where consciousness can be digitized and people's minds transferred to cyborg bodies, the last generation of aging humans who refuse the procedure are exiled to islands around the world, both so they can be protected from the dangers of the outside world and shuffled out of sight of the "deathless." On one of these islands, a glass cyborg woman named Beth and her adopted son Max, someone on the autism spectrum (not specified in the story, but that's what it sounded like) who cannot undergo the cyberizing procedure, arrive to shake up the island's inhabitants and grapple with the nature of immortality, aging, and stagnation.

Chang Yeon is a CEO who sends an inhuman "sailor" trawling the multiverse to look for alternate versions of herself, versions she can harvest upon their deaths to transfer their outstanding traits into her own mind to make her more perfect. (She knows they are dying because "brains secreted a special substance about two to three weeks prior to their deaths, regardless of whether or not the person knew their death was imminent." Really?) The one version of herself who refuses to be integrated is the subject of this story--an alternate Chang of the Roo people, a species of human termed "ant-sized" (Chang Yeon's doppelganger is 5.6 millimeters tall [Really?]) who use the sap of a certain plant to physically reincarnate their bodies after death. There's a lot of telling in this one instead of showing, and I just didn't care for it.

"The Ancestral Temple in a Box," Chen Qiufan, translated by Emily Jin

Sonny Huang arrives at his dying father's bedside to be given the titular "ancestral temple," a virtual reality simulation of his clan's history and traditions. There's a lot more to it than this stark description, of course: the traditions of Sonny's ancestors to make beautiful gold-lacquered wood carvings, which tradition Sonny wants to replace with robots; Sonny's realizing that those same carvings constitute the historical narrative of his people; and in the end, Sonny's creating a carving utilizing both machines and humans, a beautiful hybrid piece of art that tells the story of his people, the Teochew. (The afterward to this story talks about the real-life Teochew people of China, and the gold-lacquered wood carvings that are their traditional art.) I really liked this.