"Life is a sum of all your choices"

"It is our choices that show what we truly are, far more than our abilities." ~J.K. Rowling

It's rather interesting how several swing-state newspapers have endorsed President Obama for re-election. The latest, the Cleveland Plain Dealer, does so here. It's a tepid endorsement in a couple of places, but it's still an endorsement.

Consider a defining moment early in Obama's first term -- one with special resonance in Ohio: The outgoing Bush administration had used TARP funds to throw a lifeline to General Motors and Chrysler, but the two automakers were still at death's door. They wanted more cash and offered vague promises to change their ways. Public opinion opposed another bailout. Romney urged the companies to file for traditional bankruptcy -- at a time when private-sector credit was frozen even for healthy firms.

Obama told the companies to restructure using the Bankruptcy Court and set conditions for government financing: GM's chairman had to go. Excess plants and dealerships had to close. Chrysler had to be bought out by Fiat. Contracts had to be renegotiated.

It was unpopular but gutsy. And it worked. Ohioans today are making cars in Lordstown and Toledo. They're making parts and steel for Ford, Honda and other automakers. They're back on the job.

That's leadership that deserves a chance to finish the job. Re-elect President Obama.

The Denver Post weighs in here, pointing out that Mitt Romney's numbers and policies simply don't add up.

We know that many have a different view, and point to Romney's record in Massachusetts as ample reason for his election. Unfortunately, he never seriously campaigned as a centrist alternative to Obama.

From running to the far right on immigration and women's health in the primary and then saddling his campaign with Rep. Paul Ryan's extreme and unrealistic budget, the Romney of this election cycle is not the man elected in Massachusetts.

Instead, we must judge him on the menu of options he has repeatedly put forward during this campaign. On policies ranging from tax reform to immigration, from health care to higher education, none of Romney's numbers add up. Moreover, he has been unwilling or unable to outline for voters specifics that demonstrate his math works — probably because it doesn't.

Romney has said he will repeal Obamacare, yet insists he can keep its most popular provisions without fully explaining how he would pay for it.

He's calling for 20 percent tax rate cuts across the board. Independent analysts say the government can't come close to making up for that lost revenue without closing popular deductions like those for home-mortgage interest and charitable contributions. Romney's explanations for how he would do that don't wash.

And his pledge to create 12 million jobs in four years sounds good, but Moody's Analytics has predicted that type of job growth regardless of who is elected.

The Tampa Bay Times chimes in with its endorsement--rather ironic, considering this was where the Republican National Convention was held.

Obama also recognizes the importance of maintaining Medicare and strengthening its finances. The Affordable Care Act extends Medicare's life by eight years, to 2024. The law's $716 billion in Medicare savings and the creation of an independent panel to recommend more efficiencies are positive steps. There is more work to be done, but the path is the correct one.

In contrast, Romney would transform Medicare into a voucher program that likely would force many future seniors to pay more for less coverage. He rejects raising even $1 of new revenue for every $10 in spending cuts, and he promises to cut taxes by $5 trillion but won't say which loopholes or tax breaks he would end to cover the cost. Meanwhile, he wants to reduce the federal deficit while increasing spending on defense beyond what even the Pentagon requests — even though the United States spends nearly as much on its military as the rest of the world combined. This fanciful math could only add up to deep cuts in spending on education and other domestic programs — and tax increases on the middle class.

We wish the economic recovery was more vigorous, and we would like the president to present a sharper vision for a second term. But Obama has capably steered the nation through an incredibly difficult period at home and abroad, often with little help from Congress. The next four years will not be easy for whoever occupies the Oval Office, but Obama has been tested by harsh circumstance and proven himself worthy of a second term.

Considering Florida's senior population, hopefully this will carry some weight.


Sadly, it is not the only Romney, as his campaign for the White House has made abundantly clear, first in his servile courtship of the tea party in order to win the nomination, and now as the party’s shape-shifting nominee. From his embrace of the party’s radical right wing, to subsequent portrayals of himself as a moderate champion of the middle class, Romney has raised the most frequently asked question of the campaign: "Who is this guy, really, and what in the world does he truly believe?"

The evidence suggests no clear answer, or at least one that would survive Romney’s next speech or sound bite. Politicians routinely tailor their words to suit an audience. Romney, though, is shameless, lavishing vastly diverse audiences with words, any words, they would trade their votes to hear.

More troubling, Romney has repeatedly refused to share specifics of his radical plan to simultaneously reduce the debt, get rid of Obamacare (or, as he now says, only part of it), make a voucher program of Medicare, slash taxes and spending, and thereby create millions of new jobs. To claim, as Romney does, that he would offset his tax and spending cuts (except for billions more for the military) by doing away with tax deductions and exemptions is utterly meaningless without identifying which and how many would get the ax. Absent those specifics, his promise of a balanced budget simply does not pencil out.

If this portrait of a Romney willing to say anything to get elected seems harsh, we need only revisit his branding of 47 percent of Americans as freeloaders who pay no taxes, yet feel victimized and entitled to government assistance. His job, he told a group of wealthy donors, "is not to worry about those people. I’ll never convince them they should take personal responsibility and care for their lives."


In considering which candidate to endorse, The Salt Lake Tribune editorial board had hoped that Romney would exhibit the same talents for organization, pragmatic problem solving and inspired leadership that he displayed here more than a decade ago. Instead, we have watched him morph into a friend of the far right, then tack toward the center with breathtaking aplomb. Through a pair of presidential debates, Romney’s domestic agenda remains bereft of detail and worthy of mistrust.

Therefore, our endorsement must go to the incumbent, a competent leader who, against tough odds, has guided the country through catastrophe and set a course that, while rocky, is pointing toward a brighter day. The president has earned a second term. Romney, in whatever guise, does not deserve a first.

This prompted a .png that I posted to my Pinterest board. 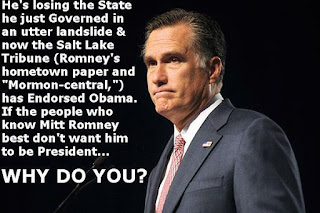