More newspaper endorsements for President Obama keep rolling in. I particularly like this one, from the deep red state of Kentucky, home of Senate Minority Leader Mitch McConnell (he of the infamous "our first priority is to make President Obama a one-term president" remark).


Separating rhetoric from reality is especially difficult when considering Republican Mitt Romney, because he has espoused so many conflicting positions. From abortion to taxes and trade with China, he has been all over the map.

Romney's a great salesman, but it's impossible to know what he's selling or predict what he would do if elected. This makes him a risky choice.

Barack Obama has a record as president, and though he has not led us to his post-partisan promised land, he has provided steady, principled leadership during an economic crisis.

I keep hearing people declare that Romney's going to win, but more and more I think that's pure fantasy. Nate Silver's Five Thirty Eight blog, for example, puts the president's chances of winning the Electoral College at 73% as of today; this has held steady for a while, and the Romney "bounce" of last month ('scuse me, earlier this month) appears to be over. Sam Wang of Princeton predicts 300 electoral votes of President Obama, while Drew Linzer, Assistant Professor of Political Science at Emory University, predicts a whopping 332 electoral votes for Obama. He also has an interesting state-by-state polling analysis.

The Huffington Post's electoral map puts the President at 277 electoral votes (270 needed to win), while the lowest poll tracker I've seen, at Talking Points Memo, has Obama at 265--five short. If you average all these out, statistically the President has it in the bag.

Of course, anything can still happen, especially with Hurricane Sandy the nasty power-line-downing monkey wrench. The Obama campaign, naturally, isn't letting up, and is pounding away at early voting, which may be the President's saving grace. Fake Noise (Fox News), meanwhile, is still screaming "Benghazi," which I believe is the ultimate red herring, since most Americans (who at the moment are concerned with a hurricane and an election, in that order) couldn't give a pink rat's ass. As illustrated by this cartoon. 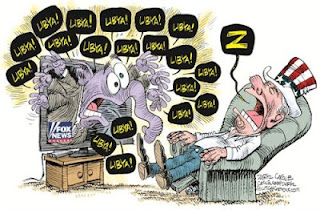 But hey, as the saying goes, keep screwing that pooch and see how far it gets you.

I am cautiously optimistic. I also happen to be off work on Election Day, and probably won't get much sleep, since it very well may go down to the wire (in Ohio). But I just don't think whichever Mitt Romney is programmed to be on display this week is going to pull it off.