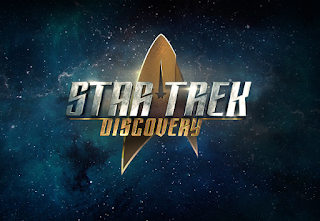 Unfortunately, it seems like this season of Discovery, especially after the season high point (so far) of "But To Connect" and the midseason break, has been pretty uneven. The pacing is off, and while individual episodes have for the most part been enjoyable, the overall impression is that they're spinning their wheels while they inch closer to the finale. Worse, that aimless spinning has made idiots of some of the characters, and for no other reason than a senseless subplot that has been allowed to go on far too long, just to set up the ending.

This episode is a case in point: Most of "Species 10-C" is a delight, as the Discovery crew works the problem and figures out how to communicate with a species  that is more alien than just about anything Star Trek has ever shown (though it does borrow a bit from Arrival). If the episode had only been about that, I would have pronounced it the best thing the show has ever done, even better than the highly-praised "But To Connect."

But dagnabbit, we still have the increasingly-stupid subplot of Book and Tarka trying to destroy the DME, even though all the evidence gathered so far about Species 10-C points squarely to letting diplomacy play out. Even worse, Book's continually giving in to Tarka's obsessed, megalomaniacal tunnel vision (until the very end of the episode, when it's far too late), makes his character, once so charming, skirt ever closer to Too Stupid To Live. In fact, if I was David Ajala, I would think I would be objecting to my character's being written as such a dumbass. Because Tarka has fooled him now, on his own ship, not once, not  twice, but three times. Yes, Jett Reno (who again nearly steals the entire episode), points out that "You and Tarka have made some dubious choices, because you're both in pain and you can't see it," but I can't figure out what exactly Book had to see to realize that Tarka was going to screw him and everyone else over, time and time again.

But Tarka is still getting away with it, to the point of persuading the equally dumb and impatient General Ndoye to act not merely as a neutral conveyor of information but an active saboteur, venting plasma out of Discovery's nacelle to free Book's ship from the orb Species 10-C has trapped them in. Yes, I know Ndoye is frothing at the bit because there's only 12 hours left before the DMA's effects reach Earth. But this actually goes back to the biggest mistake made in the back half of the season: the idiotic, unreasonable artificial deadline the writers stuck on the DMA. Not only is this unnecessary, it's making formerly well-written characters behave like jackasses. Even Miracle Michael Burnham can't (and more importantly, shouldn't have to) establish communication and diplomatic relations with a completely alien species in twelve fucking hours. If the deadline wasn't there, Tarka and everyone else would have been able to let things play out. And hell, who knows, after everyone was getting along Tarka could have explained his situation and asked Species 10-C nicely for help, and they might have volunteered to provide the power to get him to his alternate universe!

As it is, we have Tarka wreaking havoc yet again, breaking Book's ship free of Discovery and sending it toward the hyperfield's power source, even as Jett Reno is trying to tell him his "cure" will the worse than the disease--the hyperfield will implode, their two ships and an entire intelligent species may be wiped out, and oh yeah, Earth, Titan and Ni'Var will be too! Not that he cares about that, obviously, but he shouldn't have been in a position to destroy so much in the first place. The "First Contact" part of this episode was fascinating, and the entire thing should have been only that. Then understanding could have been achieved, the problem solved, and the loose ends tied up.

Unfortunately, there is one episode left, and no doubt it will involve a lot of pew pew explosions and people dying. I don't give a crap if Tarka gets offed, but I'm afraid Jett Reno is going to go down with Book's ship. We haven't seen near as much of her as I would like, no doubt because of Tig Notaro's busy schedule, but it will be a crying shame if she dies. And when Stamets asked Hugh if he was all right and said they were going to go on a vacation, just the two of them, when this was all over, that made me really nervous.

Television writers' rooms are made up of multiple people, aren't they? Did no one point out that they were going down an entirely wrong road with this? I can understand Book and Tarka's motivations in the beginning, but it's dragged on far too long and wrecked both their characters (well, Tarka's always been an asshole, if a tragic one, but Book used to be written to be smarter than this). The show's fifth season is supposed to be only ten episodes, to line up with Picard and Strange New Worlds. I hope the powers that be make some better decisions next time out.