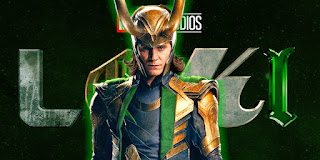 This is Marvel's third series, featuring Tom Hiddleston as everyone's favorite villain. When we last saw Loki, he was quite dead at the hands of Thanos--except that, oops, during the time travel shenanigans of Avengers: Endgame, Loki grabbed the Tesseract and made off with it when he wasn't supposed to. This show takes off directly from that moment, as Loki lands in the Gobi Desert with the Tesseract, and promptly scales a rock in an attempt to intimidate the three tribespeople who are staring bemusedly at him. Loki immediately starts off as a pompous ass, proclaiming himself "burdened with glorious purpose," which as we will see, turns out to be truer than he knows.

But his braying is interrupted by people coming through a magical door, armored people who take Loki into custody as a "variant" who disrupted the timeline. The woman leading them, identified by the closed captioning only as "Hunter-15," is not only thoroughly unimpressed, she knocks him down with a slo-mo stick. Loki is dragged through the door and the timeline is reset.

Several delightful little set pieces follow, as Loki is processed through the bowels of the TVA bureaucracy. This turns out to be the Time Variance Authority, the massive secret organization that guards the Sacred Timeline, keeps it from unraveling, and punishes "variants" who temporarily create alternate timelines. (Which is a bit sinister, as the Goldman Sachs guy in the episode demonstrates: they're basically wiped out of existence.) First, he's forced to give up the Tesseract; then, he's shoved into a room where his "fine Asgardian leather" is stripped from him and replaced with a bland TVA jumpsuit, which also serves to show off the fact that though Tom Hiddleston lacks Chris Hemsworth's muscles, he is still a fine-looking man.