Coming Out of the Dark: Movie Review, "A Quiet Place Part II" 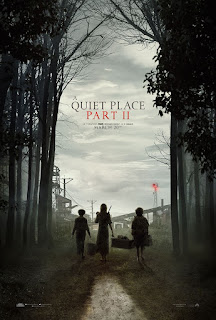 ("The Dark" being, in this case, the first movie I have seen in a theater in over a year. Unmasked, because I'm properly vaccinated. I went to a Memorial Day matinee, and the theater wasn't quite half full. It felt damned strange to be sitting next to somebody, in this case a teenager the father went out of his way to assure me was not sick in case he should cough.)

This is the sequel to 2019's A Quiet Place, an alien invasion sci-fi/horror story of creatures with enormous ears who hunt by sound and move so quickly you don't see them coming (although they've certainly heard you). The first film focused on a family in a small town that was quickly overrun, who slink barefoot around the denuded remains of the town and scavenge to survive. The Abbotts, Lee and Evelyn (John Krasinski and Emily Blunt) have a bit of an edge in that their daughter Regan (Millicent Simmonds) is deaf and they can communicate via sign language. (The actor is also deaf in real life.) At the climax, Lee is unfortunately killed by the aliens--but Regan discovers that her cochlear implant can generate feedback at a frequency they can't stand, giving humans (Emily Blunt in this case, with the perfect I'm-coming-for-you-motherfuckers expression as she racks her shotgun) a chance to kill them.

In one way, this sequel is more of the same. It picks up where the first movie left off, with the Abbott family burned out of their refuge and having to creep very softly into the little town, looking for shelter. The aliens are still rampaging across the countryside, there are few people left, and there seems to be nowhere to hide. Writer/director John Krasinski sidesteps the sequel-itis problem by focusing on his characters, in particular Regan and her brother Marcus (Noah Jupe). Emily Blunt takes a bit of a step back, and there is a new character, Emmett, a friend of the family played by Cillian Murphy. But the breakout star of this movie is Millicent Simmonds. She is a revelation, and at the end she gets to be a feedback-generating, monster-killing badass.

This is a well-written, directed and (especially) edited movie. There are lots of shots of feet (dirty, cracked and sometimes bloody), showing the characters as they slowly and silently walk across the abandoned, perilous landscape. Krasinski paces this film very well, and ratchets up the suspense almost unbearably in the third act. (The editing also helps with this, as the two separate storylines--Regan's and Emmett's, and Evelyn and Marcus', are edited for maximum tension. The sound, or lack thereof, also plays a role. Several of the scenes, particularly at the beginning of the film where "Day 1" of the invasion is shown, give us a window into Regan's character as they are shot in utter silence as the monsters approach.) The screenplay is even more bare-bones with its dialogue than is usual for a film--obviously there is more subtitled American Sign Language than actually spoken, but even then, every word crafted does double and triple duty.

Having said all this, I have a few nits to pick, and they mostly have to do with the worldbuilding. We see more of the monsters in this movie than the first, which is fine. But we also learn more about them, and some of that makes no sense. For instance, on "Day 1," the first indication that something is wrong is a dark contrail arcing across the sky above the Abbotts' softball game--the implication being, it's an alien ship falling to earth. Right after that, the monsters appear in the little town and proceed to lay waste to vehicles and people. One wonders if it was purely an accident that the aliens crashlanded on Earth, particularly when it's revealed in the third act that they can't swim. If that's the case, why in the hell would they voluntarily land on a planet that's 70 percent water? Also, although they're evidently intelligent enough to be accomplished hunters, they don't seem to actually be sentient. If not, who the heck made the spaceships they arrived in?

In addition, while I perfectly understand Krasinski keeping a tight focus on his characters and their small-town setting....where the hell is the U.S. military in all of this? These monsters can be killed, by guns and in Regan's case, with a pipe she uses to stab a sound-shocked alien. Sure, they move incredibly fast and have huge shiny Venom-like teeth, but they can be mowed down with a tank or taken out with a drone just like any other target. I can't imagine that any scientist, upon seeing those enormous cauliflowered alien ears, wouldn't immediately begin investigating what sound could incapacitate them. Logically, it wouldn't fall to Regan to discover the high frequency that can take them out.

Another thing that bothered me is what should be a big casting no-no--the unfortunate use of the Sacrificial Negro. There are only two speaking roles for men of color in this film, and both characters get taken out shortly after they appear. (Hell, in IMBD's cast listing for the film, they aren't even given names.) Obviously a lot of people die in movies like this, but that's not the point. In 2021, it should be verboten to introduce two characters of color in your movie and almost immediately kill them off. I liked Cillian Murphy's performance as Emmett, but his acting isn't so precious that he couldn't swap roles with Djimon Hounsou (the doomed "Man on Island") and let the POC live.

Nevertheless, despite these hiccups, this is a worthy sequel to the first movie. The ending leaves room for a third film, and given the robust box office, I imagine another will be forthcoming. Hopefully the focus will be expanded just a bit, to show how the rest of the world (a la Independence Day, although lacking that film's bombast, please) is coming together to eliminate the threat.