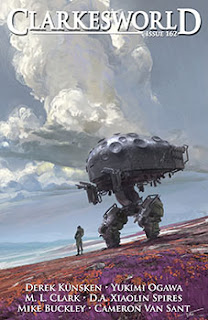 I liked the cover on this one, by Thomas Chamberlain-Keen at Playground Games. It reminded me of Simon Stalenhag's work.
"Time Reveals the Heart," Derek Kunsken
This time-travel tale had nice ideas, and would have been better if I cared about any of the characters.
Grade: D
"Coffee Boom: Decoctions, Micronized," D.A. Xiaolin Spires
This wasn't the best story in the issue, but it was the funniest. The idea of someone pulling off an elaborate con to steal a fifty-five-million-dollar model particle collider to make...the world's best cup of coffee is hilarious.
Grade: B
"Leave-Taking," M.I. Clark
This one featured first contact with some very weird aliens, and a main character who babbled for pages and pages over some minor character development that it seems to me could have been wrapped up in a few paragraphs.
Grade: D
"The Amusement Dark," Mike Buckley
This story is the star of this issue. As you read it, you might wonder why it's called "The Amusement Dark" instead of "The Amusement Park." That question is answered within the story itself, as this setting is pretty bleak. It's interesting in that it's set after the AI (here called "First Ones") revolution, when humanity has been thoroughly defeated and nothing the characters do is going to change that. But as the main character puts it: "There's no stupid. There's no impossible. There's just the darkness and what we'll do with it." This tiny unexpected ray of hope in the story's final paragraphs makes for a memorable ending.
Grade: A
"Grayer Than Lead, Heavier Than Snow," Yukimi Ogawa
I wonder if I'm the target audience for this story, because I feel like I didn't really understand it. It talks about a conflict between "colorless" natural humans and manufactured androids with elaborate skin colors and patterns. The first three paragraphs were also written in second person, past tense before morphing to third person, past tense for no apparent reason. That bugged me.
Grade: C-
"The Whale Fall At the End of the Universe," Cameron Van Sant
This is a cute, if slight, tale about a far far future and space whales scavenging a corpse the size of a city and falling in love.
Grade: B-