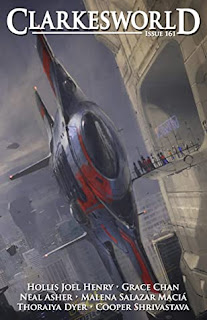 Pretty slim pickings in this one. Or maybe I'm getting ever more cranky in my *mumble mumble* years....

Toozen is a "September," a "child of a child of a child born in late September," after a "big accident when the science men were playing with light." He comes to realize that people are not nice, that hunters are coming to take him out because of what he is (and after he has mindwiped a lot of other people). This is a bleak little tit-for-tat story that doesn't really seem to be going anywhere.

This is an odd little hybrid of rebellious medical nanobots, a settlement on an alien planet, and an ancient myth of the Crocodile Woman. Okay, but not really memorable.

If you want a more science-fictional take on Ents (different kinds of sentient plants arguing with each other at the end of the world), this is the story for you. I didn't care for it.

A former convict, a murderer, thief and smuggler, is spared because of his encounter with an alien (said alien also forces a conscience and empathy on him) and sent on a journey to encounter what is eventually revealed to be this alien's mate. This story seemed awful damn long-winded to deliver what was ultimately an underwhelming message.

The most promising story in the issue, this had a nice setup and some interesting worldbuilding. At the end of the 21st century, gene splicing is commonplace (in China; not so much elsewhere), and "natural" childbearing is illegal; boys are given vasectomies and girls are implanted with birth control at puberty without their consent. The thought of bearing a child the old-fashioned way is an anathema, the protagonist Lian has five genetic parents, and children are borne from surrogate mothers and brought up in "Children's Centers." This story started out well, with some thoughtful discussions of the issues raised, but it's undermined by an abrupt and to my mind unearned 180-degree turnaround from the main character.

I'm beginning to think this author's work is just something I bounce off of. I tried her novel Crossroads of Canopy and didn't like the main character at all, and these characters weren't too great either. Also (a minor annoyance, but it still bugged me) the author uses upside-down vowels and backwards letters in some of the names.

The nonfiction essays definitely outweigh the fiction offerings in this issue of Clarkesworld. This article discusses Jules Verne's "scientific romances": "It's this sense of fascination, wonder and curiosity that truly makes Verne a father to science fiction, more so than any specific futuristic quality of his work. Verne loves to tell us how things work, what things look like, how things taste and smell and feel." This piece easily could have been longer.

This long, in-depth interview with this author made me sit up and take notice: I hadn't paid much attention to him before. This spurred me to reserve his two latest releases at the library, so I'm sure he'll count that as a win.