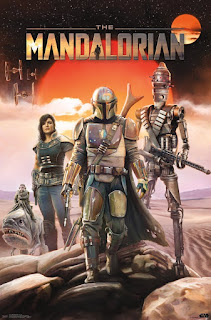 Yeah, I broke down and gave the Mouse some of my hard-earned money. (It is cheaper if you subscribe for an entire year, after all.) I've about reached my limit for streaming services, though; at least Hulu lets you put your subscription on hold for up to three months at a time. (And it will probably be the first to go, after Marvel's Runaways and The Handmaid's Tale is finished--or perhaps sooner if the latter continues on its downward trajectory.)

I came to this having never watched the Star Wars animated series (Rebels and Clone Wars), and I knew next to nothing about the Mandalorian backstory. A "Star Wars spaghetti western" was enough for me to give it a try. (That and, of course, all the Marvel series lining up.) I didn't have high expectations for this, and was rather pleasantly surprised.

First off: these are some very lean and mean stories. They're almost all within the 30-40 minute range, with the finale, "Redemption," clocking in the longest at 49 minutes (partly because it fills in the exposition and background eschewed by earlier episodes). I imagine this is because the showrunners knew their audience would largely be comprised of Star Wars nerdheads who were aware of all background minutiae, so they felt they could dive right in.

And dive in they did, with this fast-paced story of the Helmeted Bounty Hunter of Few Words, tracking an "asset" that has eluded all who came before him. This, of course, is the series' secret weapon: 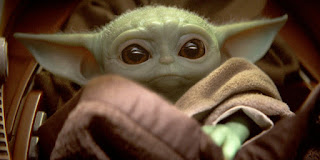 Baby Yoda, the Meme That Ate the Internet.

(Some of said memes are seriously clever. My favorite is this snippet from the show combined with music, in this case the breakout song from Season 1 of The Witcher, "Toss a Coin To Your Witcher." Hopefully you can watch this before Disney throws a fit and pulls it down.)


(Apparently the showrunner, Jon Favreau, persuaded the powers-that-be not to leak the existence of the precious baby [and thus not release any toys] until the show came out. This was a stroke of genius, even if Disney didn't get its billion or so merchandising dollars this Christmas.)

Story-wise, this was a combination of episodic and serialized, although even with the one-offs you could sense the underlying arc. We dive into the Mandalorian culture (their tag line, "This is the way," became an instant classic), and get a glimpse of life away from the familiar Star Wars universe we've seen so far, free of the Jedi, the Sith, and the Force. (The characters have no idea what Baby Yoda is, and the Mandalorian Armorer says she's heard "legends" of a "race of sorcerers called the Jedi.") It's a tidy eight episodes that doesn't drag or overstay its welcome, and builds to a very satisfying finale. "Redemption" was directed by Taika Waititi (who voiced one of the show's best side characters, the bounty- turned nanny-droid IG-11), and his trademark wacky sense of humor was there from the first scene. (In fact, the entire sequence at the beginning with the two stormtroopers felt improvised, as Waititi did with so much of Thor: Ragnarok.) The pacing was strong in the finale, balancing the blaster battles with necessary exposition, and he tugged at viewers' heartstrings with the sacrifice of IG. I also must praise Deborah Chow, who directed two of the season's best episodes, "Chapter 3: The Sin," and "Chapter 7: The Reckoning." Reportedly she's going to be in charge of the upcoming Obi-Wan Kenobi series; if so, that show is in good hands.

(And may I mention how gratifying it is to see a female character onscreen who isn't a waifish, stick-limbed white chick? Gina Carano, as Alderaan Rebel trooper Cara Dune, looks like she is physically capable of tossing people over her head, and proceeds to do just that. She isn't a bad actor either.)

The season ends with Mando taking on full responsibility for Baby Yoda, following the Mandalorian "way" of the Foundling, which he himself was. This is a terrific setup for Season 2, and I'm looking forward to it.