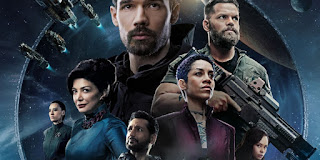 I am a big fan of The Expanse, so as much as I sometimes want to lash Jeff Bezos for Amazon taking over the world, I will always thank him for rescuing this show. I will state upfront that I thought Season 3 was about as perfect a season of television as I have watched in a long time, so this season had a lot to live up to.

I am happy to report that for the most part it did.

This season is mostly based on the fourth book, Cibola Burn. (You can tell which season it is by the title of the final episode, as they always use the book titles.) I say "mostly" because there were characters and storylines from the fifth book, Nemesis Games (which I have not yet read) woven into this season. (Thinking about that, that was a helluva sign of confidence from the showrunners, as they did not know the show would be renewed for season 5--which it has been--while they were making this one.) One thing which immediately became apparent is the complexity of the season: no less than four storylines were being juggled. Chrisjen Avasarala's running for election as head of the UN on Earth; the Rocinante crew on Ilus; Bobbie Draper on a deteriorating Mars; and Drummer and Ashford (and Marco Inaros) on Medina Station, guarding the ring gates. I'm sure the editors groaned when they heard this, but they did a tremendous job. The pacing of the individual episodes always flowed well, even when switching back and forth between storylines.

Acting-wise, I must single out the two that particularly struck me: Frankie Adams as Bobbie Draper, and the incomparable Shohreh Aghdashloo as Chrisjen Avasarala. Adams has really grown into her role, giving Bobbie Draper a depth and nuance that I don't think was quite present when she began. (Also, I didn't really notice until this season how tall and muscled she is, especially compared to some of the other characters. I wondered if this was the directors' using different camera angles and such, but according to the show's Twitter feed, this is how the actor appears in real life.) As Bobbie was not in Cibola Burn until the book's epilogue, I am grateful the showrunners devised this storyline for her this season (reportedly based on one of the Expanse side novellas). Seeing Mars society falling apart after the discovery of the ring gates and the 1300+ inhabitable worlds beyond them, thus rending the terraforming of the planet unnecessary and wrecking their economy in one fell swoop, makes a powerful statement.

Shohreh Aghdashloo gets a meaty storyline this season, as Avasarala succumbs to the lure of political power and goes so far as exploiting the memory of her son's death to win the election (which she loses anyway). She also gets to let loose with F-bombs, which doesn't make as much of an impact as one might think, because everyone else does as well. Still, she spits out her "fucks" so nastily, and the actor's famous gravelly voice is perfect for them. The costume designer did an excellent job with Avasarala's costumes, as the character's dress and makeup choices turn out to be important indicators of her emotional status.

I also must note Cara Gee and David Strathairn in the Medina Station plotline. Drummer's choice to vote to spare Marco Inaros will come back to bite her big time, no matter that she did it to pacify the rival Belter factions. Strathairn, as Klaus Ashford, elevated every episode he was in, and [spoiler] I will miss his character. But the show did right by him.

Plot-wise, there is a lot going on here, and I think the season will reward rewatches. Let's not forget that the Expanse books are thick volumes. Cibola Burn runs nearly 600 pages, and translating that into ten episodes--and putting in the stuff from Nemesis Games--isn't as easy and seamless as the final product looks. This is where I think the heart of the show's success is having book co-authors Daniel Abraham and Ty Franck heavily involved in its production (they write several episodes this season, including the finale). This makes the shift from print to film much easier and keeps the quality high.

Favorite episodes: ep 6, "Displacement"; ep 8, "The One-Eyed Man": and ep 9, "Saeculum." I wasn't as fond of the finale, "Cibola Burn," because it felt like a leeetle too much setting up for the next season, even though it was necessary. Still, talk about whetting the viewer's appetite for what's to come. If they keep on like they have been, Season 5 is going to be fantastic.

In short: this entire series is highly recommended. If you have Amazon Prime (and even if you don't, since the seasons are coming out on Blu-Ray), don't miss it.
Posted by Bonnie McDaniel on 12/25/2019