Streamin' Meemies: She-Ra and the Princesses of Power, Season 4 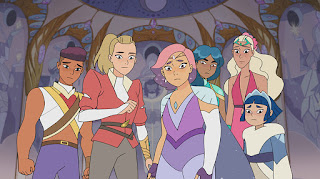 Yeah, I watch a kid's cartoon. I admit it. I've found, however, that many kids' cartoons (or at least the good ones, like this one) have the obvious text for the kids--and a lot of subtext for the adults. One of the most refreshing things about She-Ra is the straightforward, no-time-to-waste storytelling: there's thirteen episodes this time around (at least Netflix didn't split the season, like it did last time--grrr), but each one is only twenty-three minutes, so there isn't a superfluous scene. The storylines and themes are easy to follow, and the dialogue is on the nose. Again, that's due to the show being aimed at younger viewers, but there's a great deal here for the grown-ups to enjoy.

When we last saw our intrepid heroes, Adora had finally broken free of Catra and the Horde had been (temporarily) defeated, at the cost of Queen Angella sacrificing herself. This made her daughter, Glimmer, the new queen of Bright Moon. Right away, this throws a spammer in the works: the relationships between the Big Three (Adora, Glimmer and Bow) are disrupted and never really healed, even by the season's end. Glimmer is thrown into a role she is ill-prepared for and makes some questionable/bad decisions, and Adora is reluctant to let go of her previous position of authority and to treat Glimmer like the queen she now is. Bow, unfortunately, is caught in the middle, and spends most of the season trying to bring the other two back together. (This is one of my main complaints this season, that Bow is given hardly any character development.)

In general, the characters shine this season, with some spotlights on characters not previously explored: Perfuma, Frosta, Mermista and (especially) Scorpia. (I've always been a fan of Mermista's dry, droll, perfectly deadpan snark, and the episode where she solved a mystery by referencing a series of books published in the She-Ra universe is delightful.) Perfuma is highlighted in episode 2, "The Valley of the Lost," where she learns more about her powers, and where we sadly also see the sendoff of Geena Davis' Huntara. Mermista and her mysteries are brought to the fore in episode 7, "Mer-Mysteries," and Scorpia is given some welcome background and crucial character development in episode 6, "Princess Scorpia," one the best episodes of the season.

"Princess Scorpia," in particular, is grounded in one of the season's overriding themes: friendship, the difference between a good friend and a bad friend, the effort needed to maintain a friendship, and above all, the strength to break away from a toxic person, or what Scorpia calls a "bad friend." She is referring to one person when she says this--the villain Catra, who Scorpia finally sees for what she is and walks away from. The entire episode is a buildup to that moment, and it is as cathartic as one might expect. (The relationship between Scorpia and her little robot, Emily, is also touching.) Catra is also affected by this: later on, she is holed up alone in Entrapta's wrecked room, isolated and depressed and suddenly realizing what Scorpia meant to her. (Again, this is a kid's cartoon so this is not overtly romantic, but adults can read the subtext.) It's enough to give the viewer a shred of sympathy for Catra, a pretty complex villain, but at the end, of course, she ruins her sympathetic moment by promptly sucking up to Hordak Prime.

The most prominent new character, Double Trouble, is a campy, overemoting drama king/queen (the character is non-binary, as is the actor) of a shapeshifter who plays both ends against the middle, selling out both the Princess Alliance and the Horde. Swift Wind, Adora's rainbow-hued flying unicorn, also gets a bit of play. The Horde's former second-in-command, Shadow Weaver (voiced with wonderfully slimy unctuousness by Lorraine Toussant), begins teaching Glimmer magic--and taking advantage of her inexperience--and the sorely missed Entrapta makes her reappearance near the season's end, in "Beast Island." (Where we discover considerable abandoned First Ones tech and the fact that Glimmer's father, Micah, isn't really dead.)

Plot-wise, several layers of the onion are peeled back, changing the story from a sparkle- and glitter-filled fantasy (albeit with the grimy green-brown tech of the Horde) to a world with more of a science fiction feel. The mystery of Mara, the first She-Ra, is revealed, along with what she did and sacrificed to protect Etheria. She's not a traitor, it turns out, although the First Ones avatar Lighthope most definitely is (though to be fair, she's trying to carry out her long-delayed, thousand-year-old programming). In the final episode of the season, "Destiny Part 2," Glimmer makes the last and worst of her decisions as queen, allowing Scorpia, the missing Ninth Princess, to connect with the Black Garnet and boot up Etheria's First Ones power network. This drags in Adora, the current She-Ra, and her sword, and she is forced to carry out Lighthope's mission. Adora eventually succeeds in breaking free and shattering the sword, but not before Etheria is sprung from the hidden dimension Mara had placed the planet in a thousand years before--and into the wider universe, where the freshly arrived Hordak Prime and his army is waiting.

Needless to say, this means the entire premise of the series is now turned upside down. All the characters have gone on life-altering journeys, and greater challenges lie ahead. I certainly hope Netflix renews the series for a fifth season, as it would be a crime to leave all these loose ends dangling. I'm not a kid, but I really enjoyed this, and I encourage others to give it a try. 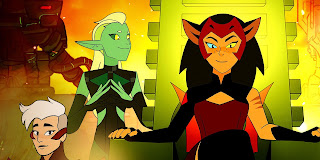