In the Blu-Ray Boudoir: Brightburn 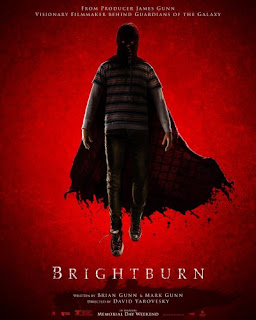 (Do we have enough B's? Maybe, except for the grade.)

I missed this film in the theater, so I rented it from my library. This is just as well; after watching it, I'm glad I didn't drop any money on it. I would've liked to be a fly on the wall during the pitch for this movie, as it can be summed up in 3 words.

Doesn't that sound cool? Or at least different. The idea of a young Superman (the film doesn't use those words, or even the description "superhero," but come on, we all know what inspired this) who is not the least bit heroic, and who in fact turns into a killer when he comes into his powers? Talk about inverting a trope. Not to mention that the next question is, "Who's going to stop him?" Especially since kryptonite is seemingly nowhere to be found in this universe.

Yeah, this is an intriguing premise. Too bad the execution is so thoroughly botched.

The main problem--and indeed, the bottom line--is the no-good, thin, underdeveloped script. Honestly, the film looks and sounds like a rushed-into-production first draft. I wonder if this was due to the power of the J.J. Abrams name, although he doesn't appear to have anything to do with actually writing or directing this mess. The characters are dull and shallow, with humdrum dialogue. It seems like the filmmakers are in such a hurry to get to the point where our Superboy, Brandon Breyer, realizes who he is and what he can do and starts offing anyone who gets in his way that they sacrifice buildup, tension and any semblance of character development. They certainly don't waste any said development on their central character, as apparently all it takes is a 12th birthday party and the denial of a rifle for a present to cause him to go stark raving batshit. (At least Superman absorbed the lessons and morality of Ma and Pa Kent and used them throughout his life. Although, to be fair, these particular adoptive human parents don't appear to have any good life lessons to offer. In particular, the excruciating scene where the father tries to talk to Brandon about playing with his penis...err, growing up is beyond awkward.) None of the actors stand out--they look like they're all in this just for the paycheck, and the kid playing Superboy seems to have only two expressions: a blank stare and a lip-curling snarl. (He also likes to dabble in his victims' blood and documents it all in his notebook, which is of course the clue the Unbelieving Mom--who was terribly written, as a character--stumbles upon that finally convinces her their Darling Alien Foundling is in fact doing these terrible things.)

The worldbuilding is also nonexistent. I'm sure this is partly due to the fact that they can't legally mention the "Super" word, but the film also eschews the existence of other superheroes--or aliens, since this is what Brandon actually is--altogether. A major logic fail is the fact that his ship supposedly fell to earth in 2006. Well, the last I checked, Google Earth existed then, as well as quite a few high-tech government spy satellites--and you're telling me they didn't detect this asteroid/spaceship blazing its way through the atmosphere, track its trajectory, and send some jack-booted Homeland Security thugs to the landing spot to scoop up whatever remained before these Kansas farmers could find and ferret away the alien baby? Especially since our Superboy, raised and controlled by the government, would have made a great weapon to use in the so-called War on Terror (as well as any number of Trumpian enemies, real or imagined). Hell, he could have smashed Osama bin Laden or any ISIS and/or al-Qaeda fighter to bloody mush in one pass.

It's maddening that these people could have come up with such a fantastic premise and utterly fail to do anything with it, besides slathering on the murder and gore. (Specifically, if you have any squickiness regarding eyeballs and faces, there are two scenes in this movie where you'll need to avert your eyes.) The ending is also a downer, as our Superboy (after dropping his mother to her death from 35,000 feet) brings down a 747 and afterward sits in the wreckage eating a chocolate-chip cookie. This scene, and the end credits, sets up what this world's future will be--this superhero sociopath wreaking havoc with no one to stop him. (And let's not even think about what awfulness he'll come up with once he gets past puberty.)

Blargh. Let's skip this one, please.