Hoo boy. This episode demonstrates what has become the modus operandi of this season of Discovery: over-the-top, overstuffed, convoluted, unnecessary plot twists, and plot holes big enough to warp a starship through, balanced out with stellar character moments. Spoilers ahoy, after the picture. 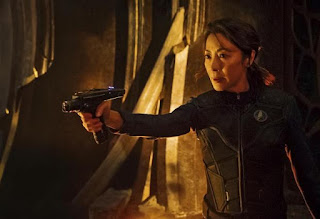 (I've used another image of Philippa Georgiou, because as usual, Michelle Yeoh damn near salvaged the whole thing all by herself.)

We open with Airiam's funeral, which would have been more emotionally resonant if we just hadn't gotten to know her before she got offed. This included the first of two great Saru scenes, as the Kelpien sang Airiam to her rest as her coffin was catapulted into space. (Was that really Doug Jones singing? If so, hell, what can't that man do?) Then we have a round-robin scene of discussion about the Section 31 rogue AI and the Red Angel, interrupted by Ensign Tilly busting in and saying she found a snippet of code from the Red Angel in Airiam's memories--a snippet that matches the biological scans of Michael Burnham.

Oh. (Which comes as no surprise to fans of the show. In fact, a certain Australian wag put up a poll on this very question last week.)

The next scene shifts to Sickbay, where Hugh Culber assures Pike, Spock and Admiral Cornwall that it is, indeed, the future version of Burnham operating the Red Angel. (While it's nice to see Wilson Cruz again, and obviously the writers wanted to give him more to do, is it really a good thing to reactivate Dr. Culber to duty without giving him an extensive physical and psychological evaluation? Seeing as he was, you know, so recently dead and all.)

(Oh yeah, and Culber stating confidently that it is Michael? As we'll see at episode's end...whoooooops.)

Given this assertion, Stamets, Tilly and Spock come up with a plan to build a "mousetrap" for the Red Angel. Spock points out that many (although not all) of the Angel's appearances have come when Michael is in danger. Therefore, if they intentionally threaten her life, she should appear. Captain Pike objects to this, but Burnham insists on pushing ahead. (And therein is the biggest plot hole in the episode--they should not have brought her in on what they were doing. Yes, if it had been Michael, she would have been forced to show up to save her own life, but armed with foreknowledge of the plan, she also would've been able to come up with a way to escape.)

This plan, set on a planet with an atmosphere inimical to human life that Burnham is deliberately exposed to, works. She is allowed to temporarily die, the Red Angel appears to zap her back to life, and Leland and Ash, aboard Georgiou's ship, close the Angel's wormhole and cut off her escape. The mousetrap closes, the suit falls to the ground and opens, and the person within tumbles out--and it's not Michael at all, but her human mother.

To backtrack on this a little bit, Michael Burnham has lived for over twenty years thinking both her parents were dead. In a strong, tense scene in this episode, Captain Leland, from Georgiou's ship, revealed that they were covertly working for Section 31 way back when, and Michael's mother actually invented the time-traveling suit. But a younger Leland allowed their location to slip to the Klingons and they tracked the elder Burnhams down and murdered them. After learning this, Michael punches Leland out, not once but twice. Following this is another excellent scene between Michael and Spock, as they begin to work out the kinks in their relationship.

In the other plot thread, the continued recovery of Culber, there's a very good scene where he goes to Admiral Cornwall, who was apparently a therapist in an earlier period of her life, and has a short but beneficial therapy session (something he desperately needs, obviously). He also tries to talk to Stamets later on, but there's way too much going on at that moment for the two of them to have any kind of conversation, and Stamets tells him so.

Two other scenes just had me chortling, one in particular where Georgiou goes down to engineering where Stamets and Tilly are working on the mousetrap, and when Culber stops by, she immediately picks up on the tension between them (and knowing the Mirror Emperor, she's spying on everything and everyone anyway). She then launches into a hilarious monologue about Stamets' alternate in the Mirror Universe being "pansexual" and how much fun she had with him, even over Stamets' objections of "I'm gay, and so is he!" (meaning Culber). There's another bit where Saru, testing out Leland's sincerity, pulls himself up to tower over the human while saying that even without his ganglia he still has a pretty good read on whether someone is a threat, and I'm thinking, "Cripes, threat ganglia or no, this is someone you do not want to fuck with."

So now Michael's mother is thrown into the mix for some good old-fashioned family dysfunction and melodrama (or some more, rather, given her Vulcan family's history). The strength of Discovery, by far, is the characters and character dynamics. They just need to get their plotting together. Sigh.
Posted by Bonnie McDaniel on 3/22/2019