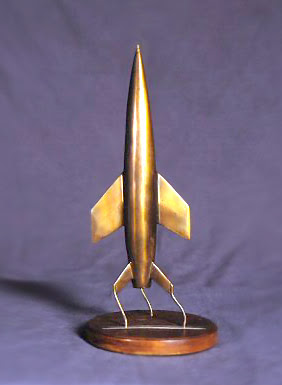 (From Loncon 1, 1957. I picked the ugliest Hugo I could find, because now we're wading into the swamps.)

Yes, folks. We've reached the two categories that made me cringe when they were announced--Best Short Story and Best Related Work.

Again, I'm not going to recap the entire history of Puppygate. Suffice to say that a white nationalist with a ten-year grudge, a vanity publishing house, a website, and several hundred mindless minions who will nominate and vote in lockstep with his slate, have hijacked the Hugos for the past two years. He changed tactics a bit this year, nominating stuff that most likely would have made the ballot anyway (including several things on my own ballot). However, he couldn't resist tossing in some particularly egregious shit (although, Cthulhu save us all, at least John C. Wright didn't appear on the ballot this time around), and this shows up most prominently in these two categories.

I'll run down each nominee in turn and then announce what I voted for.

The only good thing about this story is that it's short. One page of pain is more than enough.

Well, let's see. There are some lovely pull quotes from this story about forcible Chinese colonization and genocide, just the first few pages:

Africa would be a glorious place were it not for the Africans.

African men thought of themselves as lions, and they lived like kings of beasts, entirely content to lounge about living off the labor of one or more of his lionesses.

Africa was wasted on the Africans. China had spent 50 million Chinese lives to become a 20th-century power, how could she hesitate to spend 20 times that many more African lives to assume her rightful place as the one true 21st-century superpower?

Gah. The writer of this one is competent, but the story is terrible.

This is from gay erotic satirist Dr. Chuck Tingle, whose other titles include President Domald Loch Ness Tromp Pounds America's Butt (hey, I think I'd almost pay for that), Oppressed in the Butt By My Inclusive Holiday Coffee Cups (and I bet Starbucks would too), and Pharma Bro Pounded in the Butt by T-Rex Comedian Bill Murky and a Clan of Triceratops Rappers Trying To Get Their Album Back (and Martin Shkreli keeps on a-smirkin'). The white nationalist etc etc rather overreached in putting this one on the ballot, as Dr Tingle promptly created a website blasting him (in Tingle's own inimitable MAKE LOVE REAL way) and directing attention towards authors and causes the white nationalist hates.

"If You Were An Award, My Love"

This one is just disgusting. It was "published" on the white nationalist's blog, and is a deliberate "fuck you" to the Hugos and Rachel Swirsky. Swirsky wrote a lovely little story called "If You Were a Dinosaur, My Love" which won a Nebula and came in third place at the Hugo Awards. "Dinosaur" has been a burr under the Puppies' saddle ever since, inspiring spittle-flecked froth far out of proportion to the actual slight, whether real or imagined. So lo and behold, this nasty takeoff of Swirsky's story found its way to the ballot, also dragging in the white nationalist's other obsession, John Scalzi, and indulging in some flagrant fat-shaming (in an update at the end) to boot.

If you want a great parody of the white nationalist, read this. It's a satisfying put-down, and a helluva lot better written.

This is the sole legitimate nominee in the category, and it only got there because one of the white nationalist's slate noms said "screw you" and withdrew. This poses a bit of a dilemma for me: I read the story way back when, and liked it well enough, but did not include it on my ballot. I can see why people nominated it (and I'm pretty sure it's going to win) but I personally felt there were better stories out there, stories denied their chance by the white nationalist and his mindless minions. (These stories included "Pocosin," by Ursula Vernon, one of my favorite short stories from last year.) Knowing this, I cannot in good conscience vote for it.

(Ughh. This one's even worse.)

"The First Draft of My Appendix N Book"

This is Jeffro Johnson's excruciatingly long study of older SFF and how it relates to D&D gameplaying. This post and this post gives what I think is some relevant background. Jeffro Johnson's writing here is better than his other nomination, but I couldn't get into this at all.

This eight-hundred-page doorstop is even more excruciating than Jeffro Johnson's. Gene Wolfe is certainly a worthy subject (although I'm not as enamored of his work as some) and I commend the author for tackling this. Having said that...good heavens. I'll just read the original works and enjoy them, thanks.

Now, unfortunately, we get to the shyte.

"SJWs Always Lie: Taking Down the Thought Police" (by the White Nationalist)

Nope nope nope. This can be summed up in one sentence: "This book is for #GamerGate." Although I see at least the white nationalist has learned to count (the book's original release had two Chapter 5s).

SF Kitten articulates my feelings about this monstrosity quite well. I'm not going to dignify its depraved existence by any further comment.

"The Story of Moira Greyland"

This is the one that makes me the most angry, because the white nationalist is exploiting this woman for his own vile ends. I agree with this review of the piece, and note that it's very unfortunate that Moira Greyland is projecting her parents' twisted philosophy onto all gay people, and condemning homosexuality and gay marriage as a result. Given what she went through, it's her right to feel that way, of course...but it's simply not true, and available evidence shows it.

In any event, this category is a complete wash this year.

Now, to wash the taste out of our mouths, here's a cute baby bunny picture.