The Hugo Project: "A Single Samurai"

(Note: This is the latest in an ongoing series of posts reviewing as many of the Hugo nominees as I can before the July 31 deadline, and explaining why I will or will not vote for them.) 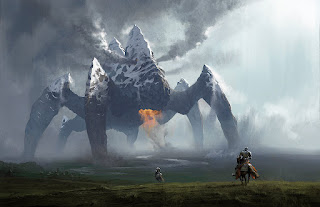 I've forgotten where I picked this up--I've been using it for my desktop wallpaper for quite a while now. It's actually a fair illustration of the last nominated short story, "A Single Samurai," which I've read now that I've downloaded the Hugo packet. This story is about a kaiju, a monster so huge it's literally the size of a mountain, so immense its grows trees and has wildlife and its own ecosystems. Only this monster awakens and goes rampaging through the countryside, and the nameless protagonist, the "Single Samurai" of the title, climbs up its sides in a doomed attempt to kill it.

This story started out in a fairly competent fashion, but when I got to its abrupt ending, I thought, "Is this all? Kee-ripes. This got nominated for a Hugo?" This is partly because the freaking first-person narrator dies in the end. I could have gone with this, maybe, if the story had been written in the first person, present tense, or if the plot twist was executed with the skill and (to be frank) balls of the narrator Georgia Mason's dying in Mira Grant's excellent Feed, where her last mention in that book is a blog post written literally as the zombie virus is taking her over. (For the record, that also made me cry, dammit.) Unfortunately, Steven Diamond is no Mira Grant; his anonymous Samurai ("Who am I? Samurai." What the hell is that? An advertisement for The Magical Monster-Slayer: Kaiju Katanas?) just stabs the creature's brain with his ensouled katana, and while still holding it, rips his own guts out with his equally magical wakizashi, and with his own dying, takes the kaiju with him. Bang bang the hero is dead, with no mention of the fact that this story opens with a nice rumination on his father, and a flashback of his father later on. It's written with the implication of the narrator looking back on his life. Which makes his sudden death impossibly jarring.

(Of course, Mr. Who Am I also falls into a cave that contains the monster's brain [both cave and brain are a sickly green]. Come on, people. I may know next to nothing about kaiju, but hell, even Godzilla had a skull.)

"Today, a single samurai killed a mountain." Bah. This story is mildly interesting in spots, but it's certainly not Hugo-worthy. My ranking of the Short Story nominees will remain unchanged.

Email ThisBlogThis!Share to TwitterShare to FacebookShare to Pinterest
Labels: Hugos 2015, the Hugo Project