Let's set up a sting, shall we?

Let's put together our hidden cameras and microphones, and walk into this jackass's store.


Southwest Shooting Authority in Pinetop, Ariz. took out an advertisement last week in the local newspaper, the White Mountain Independent, that spelled out the store's new policy in explicit terms.

"If you voted for Barack Obama your business is not welcome at Southwest Shooting Authority," the ad reads. "You have proven that you are not responsible enough to own a firearm."

Let's recruit a young man and woman, the former wearing a cowboy hat and shitkicker boots, with a telltale Skoals circle in his rear jeans pocket, the latter a wide-eyed, lipsticked, none-too-bright-looking blonde. Two walking cliches, in other words. Driving a battered, rusty 70's Ford pickup truck, of course, with a rifle rack in the back window, festooned with nasty Republican bumper stickers like these: 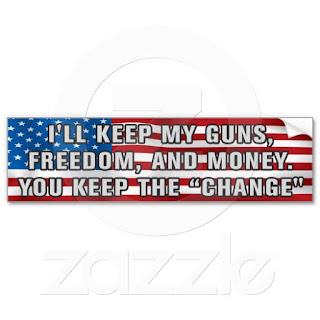 Into the gunstore we go. The shitkicker cowboy buys whatever gun he wants, after name-dropping Mitt Romney, Paul Ryan, and Sarah Palin a few times, perhaps adding a couple of re-nig jokes along the way. After the purchase is completed, the two head for the door, and right as they leave the blonde turns and says, in a voice as sweet and sharp as cyanide:

"By the way, we voted for President Obama."

I would pay good money for that to happen.