The God of Number Crunching

This jpg is a perfect snapshot of the election. 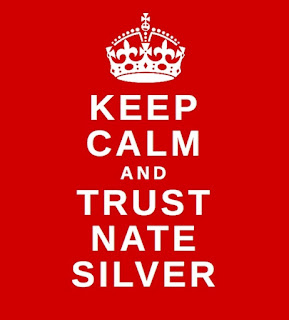 The President couldn't have orchestrated this any better if he and Nate were in the White House basement right now building a time machine, preparing to go back a year and lay the groundwork for this historic victory.

In 2008 Nate Silver called 49 out of 50 states correctly. This time he hit every single state (the last I heard, Florida still has about 200,000 votes to count, but Obama is up 47K or thereabouts, so I believe he'll get Florida), as well as the popular vote (50 to 48 percent). Turnout was very similar to 2008 levels, with higher numbers of women, African Americans, and Latinos.

Mother Jones has an article on the election and the awesomeness of President Obama's ground game. The ground game mattered greatly in Florida, according to the Miami Herald. Forbes also has an interesting article about this, written from a small-business perspective.

Also, need I say how immensely satisfying it is that all of Karl Rove's and the other SuperPAC money--literally billions of dollars--got flushed down the toilet? I do not envy "Turd Blossom" today, trying to explain himself to Sheldon Adelson and the Koch Brothers.

In short, we did it, motherfrakkers.

Not only the President, but the 20 women now in the Senate (including Elizabeth Warren and Tammy Duckworth, who I'm proud to report I contributed to). Marriage equality wins in four states. And a whole host of progressive ballot measures passed at the polls.

Sigh of relief. Nate Silver was right and Mitt Romney's ass got booted. Some on MSNBC were praising his concession speech last night, but all I saw was the same insincere, smarmy slimeball I've always seen.