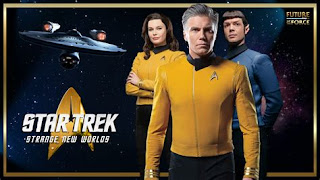 The thing about this show being (mostly) episodic is that there are different tonal shifts with each episode. "Children of the Comet" was full of the joy of exploration, "Memento Mori" was as serious and suspenseful as a heart attack, and "Spock Amok" was a more lighthearted romp that nevertheless dug into the characters and relationship of Spock and T'Pring. This episode does a bit more of that, with the addition of some character beats for Christine Chapel, all wrapped up in an episode that's halfway serious and halfway a satire of the "space pirates take over the Enterprise" concept. Oh yeah, and the pretty bow on the top is an excellent performance by guest star Jesse James Keitel as Dr. Aspen/Captain Angel.

The serious part of this episode is the basic setup: the Enterprise is taken on a wild goose chase (unknowingly) at the behest of Dr. Aspen, a counselor-turned-humanitarian who has been running aid missions to non-Federation space. The chasee turns out to be the Orion pirate ship the Serene Squall, who hoodwinks and takes over the Enterprise. Pike and crew implement the "Alpha Braga IV" strategy, fomenting an internal mutiny, while Spock, Christine Chapel and Dr. Aspen commit to the more straightforward method of attempting to fight off the invaders. That is, until the plot twist where Dr. Aspen reveals themself to be Captain Angel, the real leader of the Serene Squall, who has targeted the Enterprise and Spock for a specific purpose.

(The actor, Jesse James Keitel, is transgender. So is the character, but it's not remarked upon except for everyone using "they/them" pronouns. Keitel also turns in a marvelous performance, playing Dr. Aspen as a straightforward, empathetic and competent counselor with some rather useful advice to Spock about accepting both his human and Vulcan halves, and Captain Angel as a bit of a drama king/queen. Of course, when you get to the final scene, all of the Dr's and Captain's advice takes on an entirely new meaning.)

The satire part of the episode falls to Pike, and may I say that Anson Mount obviously had a glorious time making this episode? From his objecting to his Starfleet nickname of "Boy Scout," to his leading an away team to the supposed colonists' ship (and Una remarking on him "flouting the rules") to his immediate manipulation of the pirates by way of cooking them a good meal, persuading them to sell the Enterprise crew to the Klingons, and pitting crewmembers against one another to start the mutiny, to the final scene back on the Enterprise (which almost looked improvised to me) where he starts talking like a pirate, with over-the-top "Yaaarrrrrrs" and "walk the planks" (and Una begs, "Please stop"), Mount was having a hoot. On the Serene Squall's bridge, there was an actual wooden steering wheel--I mean, obviously that was for looks, but Pike stood there twirling the thing as they were bearing down on the Enterprise (and his asking Erica Ortegas to fire phasers to temporarily immobilize his ship, gently, came out sounding so pained).

Spock and T'Pring also come to a better understanding of each other through these events. At the beginning, T'Pring tells Spock she has been "doing research on human sex" (and Ethan Peck delivers Spock's response to this, the single word "What?" perfectly--he sounds like he's choking on his own spit). At the episode's climax on the bridge, when Spock throws a monkey wrench into Angel's plans by revealing to T'Pring a pretend affair with Christine Chapel (and kissing Chapel quite soundly on the bridge to prove the point) in an attempt to get T'Pring to renounce him and leave him to his fate, T'Pring goes along with it. After everything is over, she meets Spock in his quarters and tells him she knew he could not have feelings for Nurse Chapel. She also notes that his human side is a strength as it provided him with the passion  necessary to pull the ruse off. It's very interesting that the writers are exploring and deepening Spock's and T'Pring's relationship, even though we already know, unfortunately, how it will end.

But the final stinger in the episode is the reason Dr. Aspen/Captain Angel captured the Enterprise to begin with. They wanted to use Spock's relationship with T'Pring, and her status as head of the Vulcan Criminal Rehabilitation Center, to force her to release a prisoner who is Angel's lover or husband. Angel called him "Xavareous," but as she talks about him (and the fact that this Xavareous told Angel about Spock!) Spock realizes who it is. The final scene in the episode takes us back to T'Pring's rehab center as the camera zooms to the back of a Vulcan prisoner's head. Spock's voiceover tells us it is "a Vulcan I have been instructed to avoid at all costs. My half brother, Sybok."

Well, hell. I guess the almost universally maligned original series movie Star Trek V: The Final Frontier was good for something after all.

I certainly hope they're setting things up for both Angel's and Sybok's return, as Jesse James Keitel stole the show out from under pretty much everybody. The actor playing Sybok didn't get any lines or even a head-on shot, but as the casting is generally spot-on this series I would like to see him again. I don't think I would rate this episode as the best of the season, but it was pretty solid.