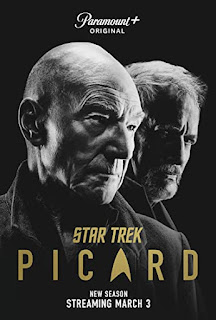 Wow, this episode was a clunker. I really miss the previous showrunner Michael Chabon.

The cast did the best with what they were given, but what they were given--save for a few fleeting moments--was so slight it could have floated away on the spring breeze. We spend most of the 38-minute running time (actually less, since that also includes the opening and end credits) at the astronauts' gala, trying to keep Renee Picard together long enough to decide to go on the mission. There's a brief conversation between Picard and the Watcher Tallinn--who notes that he still keeps calling her "Laris"--where you get the sense that Jean-Luc is practicing lines to use on the real Laris, if he ever gets back to her. Rios fanboys over a non-replicated cigar and gushes over 21st century food. Raffi hallucinates poor Elnor again and remarks that Seven seems happier than she's been in a long time, having been stripped of her Borg implants. (Seven, on the other hand, has nothing to say about this issue, which should have been a major part of her characterization this season. As a matter of fact, I don't remember if she had a single line this episode.) Agnes argues with the Borg Queen in her head, speaking out loud to an invisible person, which should have attracted all sorts of attention. (She also has an absolutely cringeworthy scene that I shall get to.) Patrick Stewart gets to deliver a Patented Jean-Luc Picard Pep Talk to his ancestor Renee, but it's so short, only a few lines, that I don't see how that could have convinced Renee Picard to do anything, much less put aside her depression, imposter syndrome, and the effects of Q's manipulation, and decide to continue with the Europa mission. (And why is she still struggling with this on the eve of the mission anyway? I thought NASA's psychological requirements and screening for astronauts were a lot more rigorous than that. Unless the mission is going through SpaceX.) Dr. Adam Soong, given a decidedly more villainous turn by Brent Spiner in this episode, meets up with Picard at the party and informs him that Q has told him all about why they are there, and later on tries to run Renee down with his car, which causes Picard to push Renee out of the way and take the blow instead. This precipitates a medical crisis wherein the gang takes an unconscious and comatose Picard (who's nevertheless having flashbacks of his mother) to Rios' free clinic, where Rios apparently drags Dr. Teresa out of bed to treat him. Of course, given that Picard now has a fucking synthetic body, I don't understand why all this panic was necessary. Isn't the damn thing a lot more durable, and can heal itself faster, than frail organic flesh? Nevertheless, Picard is now somehow stuck in his own brain, and Tallinn says she can use her sonic screwdriver neuro-something-or-other to dive into his mind and free him. Which is apparently going to happen next episode, and will probably take up a good chunk.

Unfortunately, all this isn't the worst part. The worst part was when Picard was going to talk to Renee but was surrounded by security tipped off by Dr. Soong, and needed a distraction to slip out of the gala. This was when the Borg Queen turned off the lights momentarily, allowing Agnes to gain the stage--where she proceeds to burst into a fairly credible rendition of a Pat Benatar song, "Shadows of the Night."

Now, I take a back seat to nobody in my love of Pat Benatar. I fan-voted for her to be inducted into the goddamn Rock and Roll Hall of Fame. But how the hell does Agnes Jurati, born 400 years in the future, know Pat Benatar existed? Did the Borg Queen get bored hanging from the rafters of La Sirena and tap into Sirius XM and/or Spotify? Is the Borg Queen a secret headbanger (although "Shadows of the Night" isn't a particularly metal song)? This was just ridiculous. Although I understand why that song was chosen, as the lyrics go like this:

He said oh girl, it's a cold world when you keep it all to yourself
I said you can't hide on the inside all the pain you've ever felt
Ransom my heart but baby don't look back
Cause we got nobody else
We're running with the shadows of the night
So baby take my hand, it'll be all right
Surrender all your dreams to me tonight
They'll come true in the end

Admittedly this does fit Agnes' lonely, isolated, vulnerable character and her synthesis/manipulation by the Borg Queen. But this use of the music to shed light on her was totally unnecessary, as it had already been discussed in her previous scenes. It was also unnecessary as a distraction, as she could just have pretended to be drunk, grabbed one of the jazz band's instruments, and tried to play it. The sight of Agnes onstage wrestling with a trombone would have accomplished the same thing: to take the security people's eyes off Picard.

I guess the only point of this stupidity was to give Agnes a rush of endorphins that allowed the Borg Queen to finally take her over (we see her eyes going completely black). This leads to the one genuinely suspenseful scene in the entire episode--the body of Agnes, now being controlled by the Borg Queen, marching in her red dress into the "shadows of the night."

I called one of the previous episodes "wheel-spinning," but this one spun its wheels axle-deep into the mud, and the vehicle is going precisely nowhere. This does not fill me with confidence for the upcoming Season 3 of Picard and its just-announced The Next Generation cast reunion (except for Wil Wheaton, which seems a shitty thing to do), or for the rest of the season, for that matter. Maybe Michael Chabon wrote a lot of dialogue-heavy scenes and had a more deliberate pace in Season 1, but damn, you still felt like he was doing something with the characters. This new showrunner isn't.