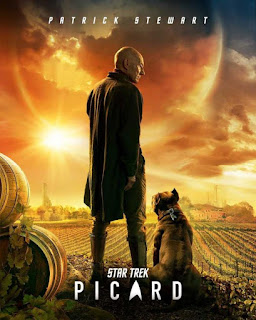 Sir Patrick Stewart is back with the next chapter of Jean-Luc Picard Post-Enterprise (and in this case, post-humanity, since he became a synth at the end of the first season). Michael Chabon, the Pulitzer-Prize-winning novelist, is now gone as showrunner, and one can tell the difference right away. There are a couple of talky scenes in this episode, but the elegiac, deliberate pace of the first season is not there, at least in this early outing. I'm sure a lot of people will be happy with this, but that was a big part of why I liked the first season so much. We will have to see.

This shows up in the very first minutes, with a frantic barrage of a ship under attack, teams rushing to the bridge, familiar characters from last season shouting, "Forty percent bridge transfer control!" and Jean-Luc starting an auto-destruct sequence. I guess that was meant to immediately draw the viewer in, but it came across as rushed and cheap, especially since the next scene accomplished the same thing far better: we're back at Chateau Picard at the end of bottling season, with Picard and Laris sitting down to have a drink of their freshly bottled vintage. Their conversation brings the viewer up to speed. It's been at least a year and a half since the events of the first season, as Laris' husband Zhaban has died:

"Did you know we were promised to each other at birth?"

"Well, as is our custom. But we did learn to love each other. Truly. Remember that Romulans don't suffer loss as humans do. We love deeply, and then we honor that love by loving again, even more deeply still."

She then asks why Picard's chosen to be alone, and his reply is: "The part of me that really wants has to wait in line, behind duty."

Well, if that isn't everything short of shouting aloud, "I WANT YOU YOU IDIOT," on Laris' part, I don't know what is. And they do indeed almost kiss, but Picard pulls back at the last minute. This incident is carried through to a later scene with Guinan (yes, Whoopi Goldberg returns, now managing the "Ten" bar in Los Angeles). Picard tries to pretend he's just coming to see a "dear old friend," but Guinan sees through that right away. The conversation continues thusly:

"It's not as if I haven't loved before. I have. Sometimes quite deeply."

"Yes, but always with those who would only be temporary."

"So you'd never have to fear any of them taking root."

"You think I'm the fearful sort?"

"Oh no. I think you've done a great many brave things, of a kind."

"It's too late. That particular ship has sailed. I watched it go."

"Jean-Luc, you're being ridiculous. It's not too late. The problem isn't time. It's you. You always talk about love as if you ever took it seriously. And you know the only things you ever put out there to break were your bones. And the only thing you ever risked losing was your life."

"That's not an insignificant loss."

"There are worse things than being dead. You know that better than anybody. You've been on your own for what, nearly a century? What's holding you back?" (Picard doesn't answer) "Okay, why did you decide to go to the stars in the first place?"

"We've discussed this many times. To explore. To meet new civilizations."

"Jean-Luc, since I've known you the only place you have been afraid to explore, be it flesh and blood or an artificial synthetic, is in here," points to heart. "What happened in there that you and I have never talked about?" (he still won't answer and Guinan lets it go) "You know what? I understand. I think your answers are not in the stars, and they never have been. Also, I suggest that we drink. Because I think there's one final frontier yet to come."

Hopefully, this scene went on so long for a reason: to set up the themes for this season. Time, regrets, second chances, and love over duty.

Those may be the themes, but the season's storyline involves the appearance of a new kind of Borg: with an elongated spiky ship instead of the familiar cube, and a Queen with her face covered with black mesh and black tentacles emerging from her back. I'm not sure about this: it seems to me the Borg have pretty well been sucked dry as antagonists, unless they are built back up to the terrifying unstoppable steamrollers they were in The Next Generation. (This was one reason I really enjoyed seeing what Hugh was doing with that disconnected Borg cube last season, and I wish that storyline hadn't been eliminated. I think following Hugh's work would have been fascinating to explore.) The end of the episode (and the teasers for the remainder of the season) make it clear we're going to be thrown into an alternate-universe time-travel story: namely, the fact that Q appears, immediately changes himself up to match Picard's (and John De Lancie's) age, and proclaims: "The trial never ends. You've been talking a lot about second chances. Well, my friend, welcome to the very end of the road not taken." John De Lancie isn't the least bit amused or buffoonish as he says this, so perhaps we're going to get the nasty mercurial Q of TNG's earlier seasons.

The rest of the gang from Picard's first season is also back: Chris Rios rejoined Starfleet and is now captain of the new iteration of Picard's first ship, the Stargazer; Seven of Nine inherited Rios' ship and is still working for the Fenris Rangers; Raffi Musiker is commander aboard the Excelsior, welcoming the first Romulan cadet to graduate from Starfleet Academy, the formerly sword-wielding Elnor (and I'm not sure I like that at all; Elnor seemed to me to be a fascinating character they did absolutely nothing with last season, and I rather wish they would have had him stay with Seven aboard the La Sirena where he could have used his sword to hack at pirates trying to steal the Fenris Rangers' stuff); Agnes Jurati, after being acquitted at her murder trial (it's a long story--watch the first season) is kinda-sorta working with Rios in some sort of unofficial capacity?; and Soji is apparently going on a tour round the Federation, reintroducing the newly recognized synths to member races.

So this first episode is definitely setup. Now whether they will follow through on some of the things introduced/teased here remains to be seen.