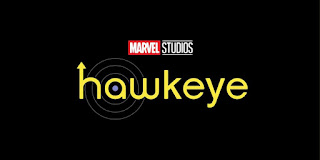 Halfway through its six-episode run, when you'd think the series would be ramping up towards the endgame, this episode slows down for some solid character work. In the process, it delivers the best scenes and one of the best episodes of the series.

We begin right where Episode 3 leaves off, with Jack Duquesne holding the Ronin sword to Clint's throat. Kate runs over, telling him to stop, and Eleanor chimes in with her own, "There's an Avenger in my dining room?" (Although one wonders if they were already there and Kate didn't just see them, or if they somehow magically poofed into existence just to catch our heroes.) There follows an awkward conversation with the four of them, with Kate asserting that she's working with Clint and she's his partner, and Clint denying it. When Clint gets up to leave, Eleanor follows him to the elevator and gives him a lecture, reminding him that Kate isn't a superhero and saying, "I can't lose her." She asks Clint to drop the case. Clint says he can't, but promises to protect her daughter. After the elevator doors close, Clint texts his wife and asks her to look into Sloan LTD, the company Kate found on Eleanor's laptop, and Eleanor makes a call to an unnamed person, asking said person to call her back and saying it's "urgent."

(Also, Clint somehow snags the Ronin sword off a table and hides it under his jacket when he leaves. This is another necessary plot bunny that irritated me--we're supposed to think that Jack didn't notice it was gone?)

Afterwards, there's a rather cloying scene of Jack and Eleanor dancing and making kissyface. Kate scowls and blushes and looks away through much of this, but she clearly sees that Eleanor apparently really loves Jack, and at least for the moment Kate drops her objections to him. Which objections are right on target, as we see when Laura calls Clint and tells him Sloan LTD is laundering money "for the Big Guy" via the Tracksuit Mafia and Jack is its CEO. It's brought home that far from being the in-the-dark spouse, Laura knows everything Clint has done and is doing. Laura also asks if anything else is missing from the Avengers' compound and Clint has her start checking for the tracking signal from the Avengers watch, seen in the first episode.

Clint goes back to Kate's aunt's apartment to rest and tape frozen cranberries on his bruises, and the scene that follows is the heart of the episode. Kate shows up with pizza, Pizza Dog, Christmas movies and a Grumpy Cat sweater for Clint. In the midst of making smoothies, Clint teaching Kate to flip a coin through the air so forcefully it will hit the switch on a TV/VCR and turn the machine off and/or knock somebody out (which will surely come up later), and watching said movies, Clint admits some stark truths. I slowed this scene down to write out the dialogue, and may I say it was masterfully acted by both Jeremy Renner and Hailee Steinfeld.

Kate: "Best shot you ever took?"

Clint: "The one I never took."

Kate: "What does that mean?" Clint tries to demur, but she presses him: "It'll be a good story, I'm sure."

Clint's expression sobers instantly: "It's just not a good story, okay? It's about the time I met someone. I was sent to take her out. And when I got there, when it was time, I couldn't do it. I just had this feeling she wanted out. Turns out I was right."

"Yeah. She was the best there was."

"It's all right. When you do what I do for a living, it's just a game of managing loss, right?"

A little later, while watching another black-and-white Xmas movie (maybe It's a Wonderful Life?), Kate: "You lost your family in the Blip?"

"God, that must have been devastating."

"Yeah. There are no words."

"Is that where you met the Ronin?" Long pause, while Clint stares into space and doesn't answer. Finally, Kate says: "It's you, isn't it?"

"Everybody dealt with the Blip in their own way. I continued doing what I was trained to do."

"Hurting people. Investigating first, but in the end, my job has always been to hurt people."

"You were a hero," Kate insists.

"I was a weapon. I was aimed by the right people at the right targets."

"Look, you made mistakes, but those are behind you."

I was a bit surprised that Clint's identity as the Ronin was revealed quickly and without the drama I expected--I thought Kate would flip when she found out. Maybe it's because the final two episodes will indeed have the action ramping up and no time for Kate to have an emotional meltdown, but it also speaks to the relationship these two are developing, that she was able to accept this. The scene also shows, once again, Clint's unresolved grief and guilt over the loss of his family, his actions during the Blip, and Natasha's death, as after Kate leaves, Clint sits in the chair and we're treated to flashbacks from the Marvel movies about all three.

The next day, Clint dispatches Kate to meet up with the LARPers, one of whom is a cop, and talk them into sneaking his trick arrows out of the evidence locker. Meanwhile, he goes to meet up with Kazi, Maya's lieutenant, and warn her off hunting down the Ronin. When he returns from this errand, the LARPers are in Kate's apartment baking snickerdoodles and showing off their homemade outfits, and Kate talks them into making new uniforms for her and Clint. In the middle of all this, Laura texts Clint to say that she's found the signal from the Avengers watch and gives him the address. The LARPer policewoman comes in with the bag holding Clint's arrows just as he leaves, and Kate (of course) insists on coming along.

On the building across the street from the apartment where the watch was found, Clint makes an elaborate plan to get inside, which Kate promptly bollixes by walking across the street and following an old man through the door. She goes to the apartment and uses her lockpicks to break in, while carrying her bow and Clint's trick arrows and complaining about it, which leads to a funny exchange: "What do you do with this giant bow problem?"

"I have a collapsible one," Clint replies, perfectly deadpan.

Inside, Kate finds the watch. She also finds handwritten notes about Clint's family, and Clint tells her to get out, realizing it's Maya Lopez's apartment. Too late: Maya is there, and she lays into Kate. But Clint is also suddenly fighting a masked person on the roof who isn't Maya--who is it? The remainder of the episode is dedicated to this four-person battle, with Clint shooting a zip line for Kate to ride over to the roof, Maya following, and the unknown masked person laying into all of them with expert self-defense and high-tech weaponry. Finally, Kate shoots a sonic trick arrow that deafens everybody (except Maya), and another regular arrow makes Maya run away. Clint rips off the other fighter's mask to reveal none other than Yelena Bulova, Natasha's Black Widow sister who was shown to be coming for Clint at the end of the Black Widow movie. Kate has Yelena in her sights but doesn't take the shot, and Yelena throws down a grappling hook, vaults over the edge of the roof, and vanishes.

At that point, Kate yells at Clint: "Who the hell was that?"

"I cannot be your partner if you don't tell me what's going on!"

At this, Clint lowers the boom. "You're not my partner. Do you understand that? You never were. Someone has hired a Black Widow assassin. This has gotten very real, very quickly. So I'm doing this alone."

"No, you're not. Look, I know that tonight didn't go as planned. But I chose to be here. I understand the risk. I understand all of that."

And unable to do anything else (at least for the moment--we know perfectly well Kate isn't going to stay out of this) Kate storms off.

I didn't expect this show to take the time for such good character work, but I really appreciated it. Now we will see how Yelena fits into all this, and what Yelena and Maya will do.