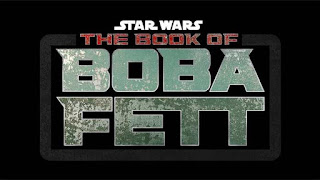 This is the next Disney Plus Star Wars series after The Mandalorian, and is a spinoff thereof. I must admit here that I have never been a Boba Fett fangirl; I didn't pay any attention to him in Return of the Jedi, and since I didn't watch the first two movies in the prequel trilogy I missed the sequence when he fell into the Sarlacc's mouth altogether. My introduction to him was in The Mandalorian Season 2 episode "The Tragedy," when Temuera Morrison reappeared to lay claim to Boba Fett's armor and kicked some serious ass. Along with everyone else, I was surprised at the end-credits scene of Season 2, which showed Boba and Fennec Shand taking over Jabba the Hutt's underground lair and killing the squirrelly little twerp who tried to take Jabba's place.

Now we have the first chapter in Boba Fett's story...and I must say, I was a bit underwhelmed.

Mainly because this was one long extended flashback. I realize that there were a few decades of intervening time to be accounted for, and one of fandom's most pressing questions had to be answered: "HOW DID HE GET OUT OF THE SARLACC PIT?" Thankfully, this was addressed right away as Boba simply punched, kicked, clawed and flamed his way out, emerging from the sand some distance away from the creature's mouth covered in nasty yellow-green Sarlacc guts. This escape nearly killed him and he fell unconscious to the sand, unable to fight as Jawas wandered past and stripped him of his armor (explaining how Cobb Vanth ended up with it in The Mandalorian) and later Tusken Raiders found him lying there and dragged him along behind their Banthas to their camp.

He spends some time tied to a post under Tatooine's twin suns (and it must have been whatever passes for their winter season, as just sitting there with no water should have killed him). He tries to escape, cutting his bonds and bashing one of the Tuskens' crested lizard-mastiff guard dogs and running off into the night. The stunned mastiff recovers and chases him down. Then he has to fight a Tusken with a sword and nearly gets his head beaten in, and is dragged back to camp. The next day, one of the Tusken kids takes Boba and a fellow prisoner, a Rodion, across the sand dunes some distance away and has them dig in the sand for little round plant/water pods (which are lying or growing right under the sand? really?). The Rodion comes across a scaly snake-like thing buried under the sand, which proceeds to rise up and attempt to kill all three of them (or four, I guess, as it hurls the lizard-mastiff across the sand with one swipe of its three-fingered claw). This creature design was really interesting, as it had six legs that enabled it to walk on two or four three-clawed feet, while being able to rear a good twenty feet in the air on its back pair of legs and toss the poor hapless Rodion and Boba around like they were nothing. Boba spends some time dangling midair from his chain, until the creature flings him away, smashes the Rodion into the sand and goes after the Tusken kid. At that point Boba picks up his chain, charges across the sand, leaps on the creature's back, wraps the chain around its neck and strangles it. After the creature is dead, the kid cuts off its head and carries it back to camp, chittering excitedly to all the adults telling them what Boba did. Why Boba didn't use this opportunity to run off is a question left to the demands of the plot and the viewer's imagination, but he returns to the Tusken camp and finally gets his water and his freedom.

I realize this backstory had to be told, or countless Boba Fett fans would have been calling for Dave Filoni and Jon Favreau's heads.  And there certainly has to be a reason why he was still on Tatooine all those years later, especially when he tells the Rodion if they escaped, he could get them to Anchorhead where he has a way offworld. But this entire sequence took up most of the episode's thirty-minute runtime (evidently they're going for shorter episodes, like The Mandalorian) and as a result we didn't get much of what was to me the more interesting storyline, namely Boba and Fennec Shand trying to establish themselves as the heirs to Jabba the Hutt's criminal organization.

In fact, these backstory scenes are presented as a dream sequence while Boba is lying in a bacta pod healing. Obviously the sarlacc's guts damaged him more than he let on during his time with Mando. (As an aside, he's sleeping in his healing tank underwater, or in some liquid healing gel, with what looks like a scuba mouthpiece? Sleeping and dreaming? I don't know about you, but I can't imagine sleeping underwater and holding this breathing apparatus in my mouth without losing my grip on it and drowning myself.) Fennec wakes him up so he can sit on Jabba's throne and take tributes, which consists of a series of oily inhabitants of Tatooine's underworld parading before him and trying to gauge the strength and ruthlessness of the person who has taken over Jabba's organization. (Boba hasn't settled into this role yet, as at one point when someone hasn't brought tribute--and indeed insinuates that Boba should be the one handing over money instead of the other way around--he turns to Fennec and whispers, "What? I'm the crime lord. He's supposed to pay me.") Evidently someone in the city where this takes place, Mos Espa, doesn't think much of either of them, as after Boba and Fennec visit a bar called the Santuary to collect their tribute, they emerge onto the sandy street and are attacked by six assassins who spring down from the rooftops, activate red hexagonal force shields attached to their arms, and try to murder them.

They don't succeed, mainly because of Fennec Shand, who manages to grab one of their electrically charged weapons and take out several of them. Boba does his best, but he doesn't seem to be on his game like he was in The Mandalorian. In fact, after Fennec runs off after the remaining two assassins (and Boba yells at her to bring one of them in alive), Boba has his two Gamorrhean bodyguards take him back to Jabba's palace and put him back in the bacta pod, whereupon we get the second half of his flashback story.

This episode was serviceable, I guess, but it did not impress me very much. (Also, could anyone come up with a more pretentious title? Honestly.) Definitely needed more Fennec Shand. Indeed, the entire Boba/Fennec relationship and dynamic, as little of it as we saw here, should be the heart of the series, and I hope we get more of it going forward. Even so, may I say how great it is to see two older people starring in a show like this? Temuera Morrison just turned sixty-one, and the ageless Ming-Na Wen is fifty-eight (and easily passes for twenty years younger). Now that the mandatory fanservice is out of the way, I hope we have some better storylines in future episodes.