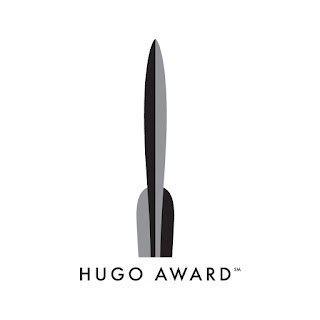 Last night the Hugo Awards were presented at the 79th Worldcon, Discon III, in Washington D.C. Since I both nominate and vote in the Hugos, I thought I'd do a rundown as to how my vote compared to the winners.

This was also my No. 1, as was the second-place finisher, N.K. Jemisin's The City We Became. I had a feeling it would be Murderbot's year. This was also borne out in the next category:

This is the first time someone has pulled off the double-hat trick of both Novel and Series in the same year. (Although if N.K. Jemisin hadn't declined her nomination in Series for the Broken Earth trilogy in 2018, it would most likely have happened then.) My vote for second place, the Poppy War trilogy by R.F. Kuang, ended up fifth in the general voting. Maybe because of its grimdark brutality? It was a rough read, but a fascinating one.

Best Novella: The Empress of Salt and Fortune, Nghi Vo

This was all the way at the bottom of my ballot--I just couldn't get into the story. However, my top choice, P. Djeli Clark's Ring Shout, came in second.

Another case of second-itis. I wasn't terribly impressed with this, but my own first-place vote, Aliette de Bodard's "The Inaccessibility of Heaven," came in next.

Not many voters liked moms and zombies, or zombie moms? My No. 1, "Badass Moms in the Zombie Apocalypse," by Rae Carson, ended up at the bottom of the ballot. My second place took the prize. (Kingfisher's--AKA Ursula Vernon's--hilarious acceptance speech about slime molds was not to be missed.)

I didn't like this enough that I placed it below No Award. The second-place finisher, A Handful of Earth, a Handful of Sky: The World of Octavia E. Butler, by Lynell George, was my third ranking, but I was meh on that at best. I am glad the top two finishers on the general ballot were actually books, as that fits my definition of a Related Work better than cons and "fringes." (Having said that, I must admit my own first-place vote went to Jenny Nicholson's YouTube video "The Last Bronycon: A Fandom Autopsy," because I found the subject matter unexpectedly fascinating.)

I fist-pumped and "YAYYYY!"-ed at this. This was my No. 1 as well. It's just another testament to the writer's prescience and genius, that a graphic novel adaptation of a book written nearly thirty years ago would still be winning SF's highest honor. (And a definite 😢 for the work Butler could have produced had she not died in 2006.)

The group mind was thinking alike here, as this and the second place finisher, Birds of Prey, were the same on my ballot.

This result receives a wet fart from me, as I have hated that show every time I've tried to watch it. Thank Deity that was the series finale and it will never show up on a ballot again. At least my own No. 1, The Expanse's fantastic "Gaugamela," came in second.

I had Neil Clarke at No. 1, as I am a faithful subscriber of Clarkesworld. He's been a bridesmaid for how many years now? I hope one day he gets there.

In looking over the voting statistics, Pho staged a bit of a come-from-behind victory to overtake Navah Wolfe and Sheila Gilbert. She was my No. 1 choice as well.

I put Maurizio Manzieri first on my ballot (he finished fifth here), but my second place went to Cai, mainly for the illustrations she did for Darcie Little Badger's Elatsoe.

This wasn't my first choice--that was Strange Horizons--but I was happy with this result (it was second on my ballot). Not only for its own sake, but because someone finally managed to break the stranglehold of Uncanny Magazine. I subscribe to that zine as well, but it was time for someone else to have a turn.

Best Fanzine: Nerds of a Feather, Flock Together

First on my ballot and another winner that made me happy. They've been knocking at the door for five years, and they finally broke through.

This winner was, shall we say, not at the top of my ballot. That honor went to Cora Buhlert, who did come in a close second. But judging from the cheers that erupted when her name was read, Sjunneson's win was very popular.

This is a category I'm getting rather meh about. I may start No Awarding it. The general taste of voters also seems the polar opposite of mine, as my winner, Maya Hahto, ended up in fifth place.

I loved loved loved this book, and I'm so glad it won. There was no doubt about its taking the first place on my ballot. I will note it's completed something of a quadruple hat trick this year, as it's won a Locus Award, a Dragon, the Andre Norton Nebula Award, and now the Lodestar.

With all the buzz around Micaiah Johnson, I expected her to win (and she was first on my ballot). Well, since this is Johnson's first year of eligibility, she'll have another chance in 2022.

These are two categories I really don't have time to pursue (and the first is a special one-off that may or may not be back), so I didn't vote.

This Worldcon had to cope with a great deal of adversity, and it's to the organizers' credit that they managed to pull it off. The ceremony was...shall we say...the polar opposite of last year's. Andrea Hairston and Sheree Renee Thomas did a fine job as hosts, moving things along at a brisk pace. (My internet connection was crappy, to the point where I had to keep pausing and restarting it, but that wasn't their fault.)

And I now know more about slime molds than I ever thought I would, thanks to Ursula Vernon!