At the Movies: Dune 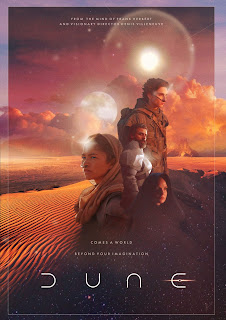 I'll preface this by saying that I have not read Frank Herbert's novel. I did see the 1984 adaption, mainly for the shot of Sting wearing that green winged jockstrap... 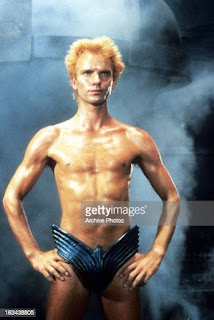 ...and mercifully managed to block out everything else. So I came to this movie fairly unspoiled, although I have gleaned the basics of the plot over the years just from what's been written about the book.

The main reason I wanted to see this movie was the director, Denis Villeneuve. He directed a bonafide SF classic in Arrival, and I am also very fond of his Blade Runner 2049 (which puts me in the minority, I believe). This movie reminded me a bit of Arrival, especially in the beginning, but as the film progressed I realized it was more like Blade Runner 2049, with its leisurely pace and scenes that are allowed to breathe. (This is not to say boring, at least for me. I wasn't bored by Dune, any more than Blade Runner.) I'm wondering if the same cinematographer was used for both, because a lot of the shots were constructed in similar ways. I know some people were complaining about his insistence that Dune should be seen on the big screen, but in this case I think he was right. I can't imagine trying to watch this movie on a tablet or--heaven forbid!--a phone. The way the shots are set up, emphasizing the terrible beauty of Arrakis with its endless dunes rolling over the horizon, the huge ships of House Atreides that fill the screen from corner to corner (and that gorgeous shot of the ship coming out of the water on their home planet), and not to mention the scene of the worm rearing up out of the sand and staring Paul down...this film is made for the big screen.

This movie is nearly three hours long. I didn't look at my watch once all the way through it, and I didn't fall asleep. I guess it could be construed as slow, but to my way of thinking it was more deliberate. The director clearly knew where he was going and was confident enough in the material to take his time getting there. Timothee Chalamet, of course, was top billed as Paul Atreides, but in a sneaky way, Rebecca Ferguson's Jessica was really the protagonist. It was her scheming and insistence on bearing a son in defiance of the Bene Gesserit, and that son apparently being the culmination of their centuries-old breeding program, that set everything in motion.

The only thing that bugged me about this movie was the sound mix. It was...less than stellar, shall we say? I always stick my fingers in my ears through the previews before any film, because in almost every theater I've been in, they're just so damned loud. I don't expect to do that with the feature itself, but I did with this one, in several spots. Fer gosh sake, people, when putting this film together did no one say "dial it down a bit?" The soundtrack was excellent, dark and brooding synthesizer-based music that complemented the story perfectly, but it overwhelmed the dialogue in a couple of places. I've already made up my mind to buy the Blu-Ray when it comes out, but I'll also be looking forward to the subtitles to catch what I missed.

For my money, this is the SF film of the year so far. I hope it does well and Denis Villeneuve gets to make Dune Part II.