In Praise of Motherland: Fort Salem 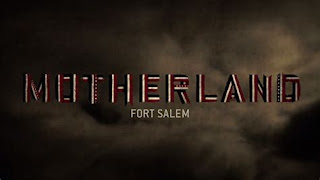 I'm pausing my book reviews for a moment to talk about this show. It airs on Freeform/Hulu (the former on Tuesdays, the streamer the next day). I had heard of it previously, in a vague yes-I-know-this-exists way, but I hadn't really paid any attention to it. That changed when the author Kameron Hurley, one of my "must-read" writers, started tweeting about it: 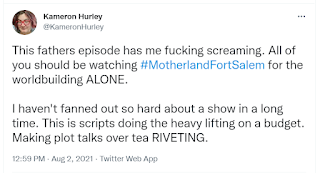 So I gave it a look. And damn, that show sucked me right in....starting with the opening credits.

It's pretty rare that opening credits, as short as they tend to be for series nowadays, contribute much to the overall feel of a show beyond a logo and a bit of music. This one gives you glimpses into an entire alternate history of America. It shows:

1) The witches' power and magic comes from their vocal cords;

2) The break with our history comes with a document called the "Salem Accords," from 1692, that "any child born of a witch shall deliver herself bodily to Fort Salem";

3) We have paintings of the witches fighting in the Revolutionary War, not with weapons but with mouths open, singing their magic;

4) There's a painting of one of the main characters, General Alder, aping George Washington at the Crossing of the Delaware;

5) We see an entirely different map of the United States, with 30 states instead of the continental 48, and a wide strip of land dividing the country from the Canadian Border to the Gulf of Mexico--including what would have been Louisiana--called the "Cession";

6) We see the several "lines" of witch families, including what will be familiar names such as Bellweather;

7) And at the end, a different U.S. flag, with a witch's pentagram (presumably 30 of them, to match the numbers of states) instead of our 50 stars.

All of this in a minute and three seconds.

This is the painting in referenced in #4: 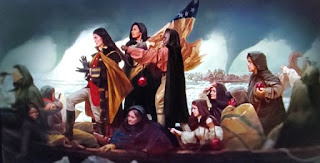 I don't want to give too many plot points away, but I will say that the women pictured here play an important part in the General's arc. They're called the Biddies, and in this show it's not a disparaging term. Although the reason they're there is pretty creepy...but you'll have to watch the show to find out what it is.

This show focuses on three young women, Tally Craven, Abigail Bellweather, and Raelle Collar, who at age eighteen are conscripted into the U.S. Army. Needless to say, with the existence of magic, technology has changed quite a bit from our world: there aren't any smart phones, for instance. And I don't remember seeing a computer anywhere. There are cars, and television, so maybe the broad strokes of the Industrial Revolution followed the same general lines in this alternate history. But none of this is infodumped, and the worldbuilding evolves gradually as it's required for the plot.

The first thing that strikes you as you watch this is....there are so many women. So many female characters: the President is a black woman, for instance, and most of the other heads of state are also female. The overwhelming majority of witches are women, and the witch lines are kept track of on the female side. This leads to what I suppose is a bit of a matriarchy, and polyamory and queerness are accepted as well. (Raelle, for instance, has a female lover--Scylla--and no one thinks twice about it. Abigail has three fathers--or at least three men in her mother's household, all of them sharing parenting duties--and during one of the Season 1 episodes she is shown having sex with two boys. At the same time.) There are also many women of color and older women in the cast. Which would not matter if these women were not well-developed characters, but they are. Tally is the naive idealist who has had her illusions shattered over the course of the show's two seasons; Abigail begins Season 1 as a privileged snob, a scion of the famed Bellweather line who needs to learn a bit of humility; and Raelle is the outsider searching for the reasons behind her mother's death and not at all pleased to be paired with Abigail (especially after Abigail calls her a "shitbird"). Seeing these three overcome their differences and bond is one of the best things about the series.

One of the most complex characters on the show is General Sarah Alder, the three-hundred-plus-year-old witch who negotiated the original Salem Accords. As you can imagine, the General has fought a lot of wars and done a lot of things, and a great many of them are....not good. Alder's past plays a pivotal role in Season 2, and her actions basically created the Season 1 antagonist, the Spree. Again, this is gradually revealed and has obviously been planned out from the start.

I really love this show. It is getting a third season, which will sadly be its last. There is a Change.org petition, which I have signed, trying to rescue the program for further seasons. In the meantime, I encourage anyone reading this to give it a try. There's really nothing else out there like it.