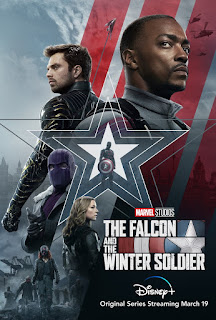 This is Marvel's second streaming series, following on the heels of WandaVision. Right from the get-go, we see this is going to be a more typical Marvel storyline. We have a short scene where Sam Wilson is dressing up as if for a funeral, picking up Steve Rogers's shield while snippets of dialogue from Avengers: Endgame play in the background.

Steve: How does it feel?

Sam hasn't taken up the Captain America mantle like Steve wanted him to, and we can see he's torn about it. Then we shift to a jarring helicopter rescue scene that turns into a CGI hurlyburly pow-pow, which seems to be there for the sole purpose of jumping up and down and proclaiming, "OH HAI THIS IS A MARVEL STUDIOS/DISNEY PLUS PRODUCTION AND WE MUST SHOW OFF OUR HIGH BUDGET SUPERHERO TRICKS." Sam jumps/falls out of planes and helicopters, gets shot at, dodges missiles, shoots back, swoops into helicopters midair and gets into nauseatingly fast-cut fisticuffs with the bad guy, dives down a canyon with the tips of his wings scraping against rock, and spins and twirls in the air, all in service of snatching some guy before the helicopter crosses the Libyan border.

It's boring, and we've seen it all before. The CGI is also a bit dodgy in places--the results of doing special effects over Zoom and at home? At any rate, I rolled my eyes and wished I had an edit button to chop this right on out. It only lasted ten minutes, thankfully, and then we got into the meat of the episode: "What happened to Sam Wilson and Bucky Barnes after Endgame?"

Sam's been working for the Air Force for the past six months, and working with his sister Sarah in Louisiana, trying to salvage the family fishing and shrimpboat business. Fortunately, the episode pays more attention to the latter. It's really nice to have a look at what turns into some complicated family dynamics: Sarah kept the fishing business afloat as best she could while Sam was Blipped out of existence, and she rather resents him barging in after five years and trying to take over, despite his protestations that he only wants to help. This comes to a head during a scene at the local bank, where Sam and Sarah try to take out a consolidation loan. Despite Sam's fame--and the extremely off-putting sight of the white banker fanboy asking him for a selfie "with arms spread"--they are turned down. Of course, both Sam and Sarah know why that is, and so does the viewer.

Meanwhile, Bucky Barnes is having his own post-Blip and PTSD problems, which take the form of nightmares about his Winter Soldier days. In one nightmare in particular, he assassinates some Russian higher-up, and then kills a poor Asian guy who happens to be in the wrong place at the wrong time and witnessed the kill. There follows a long scene with Bucky's court-appointed psychiatrist, a no-nonsense older woman who does not take one iota of Bucky's shit. These sessions are a condition of his pardon, and he also has an "amends list" he is working on--in the case shown, a woman put in power by Bucky's work with Hydra, who he then proceeds to bust. The psychiatrist (I didn't write it down, but I think her name was Dr. Naylor) tells Bucky he needs to learn to trust people, and he really is very fortunate: he has his mind back. She reminds him, "you're free." Bucky objects: "To do what?"

After the session, he meets an older Asian man, Yori Nakasima, for lunch. This has apparently been happening for some time. Unfortunately, we soon learn Mr. Nakasima is on Bucky's "amends list," and is the father of the man he killed. Obviously, this is going to come out sooner or later, and it's not going to be good. (Mr. Nakasima more or less bullies Bucky into asking the waitress where they are eating for lunch out on a date, which goes about as well as you'd expect.) Bucky still has to meet up with Sam, which I presume will happen in the next episode or two.

Earlier, in a continuation of the opening scene, Sam had turned Steve Rogers' shield over to the Smithsonian Institution. During this sequence, Steve is spoken of in the past tense, and Sam says, "He's gone," so I think it's probably safe to assume that Steve Rogers is dead. (Which would only make sense, as Steve and Bucky were contemporaries, and Bucky is specifically established as being a hundred and six. When Chris Evans reappeared [as if in a poof of magic--seriously, how did that happen?] at the end of Avengers: Endgame, he was buried under a ton of centenarian latex. There's also an unexpected cameo from Don Cheadle as War Machine, discussing the post-Blip world: it's broken and needs somebody to fix it.) Later, on his parents' boat in Louisiana, Sarah tells Sam "you'd better look at this."

The last scene in the episode is a press conference announcing that the United States of America has a new hero--and this turns out to be (and y'all saw this coming, right?) a new Captain America: a bright, white, square-jawed Captain America. (This is Wyatt Russell, son of Kurt Russell and Goldie Hawn, and he definitely has his father's prominent chin.) Sam closes his eyes and doesn't say a word, but the betrayal is written all over his face.

There's some other odds and ends, mainly an establishing of what I think the series' antagonist is going to be: a group called the Flag Smashers, who think "the world was better off during the Blip." But the main focus (aside from the idiotic ten-minute CGI pow-pow) is on character work for Sam and Bucky, which I for one was glad to see. (I'm finding that the older I get, the less I like explosions and the more I like characters, which is one reason I'm quite fond of the first season of Star Trek: Picard.) This limited series is only supposed to be six episodes, and both its stars clearly have a lot of things to work out. I hope the show gives them the space to do it.