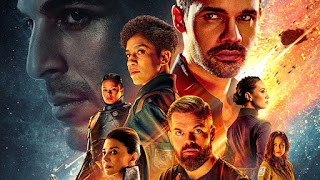 The fifth and penultimate season of The Expanse just finished up on Amazon Prime, and while I didn't remark on individual episodes as they were airing, I wanted to say something about the season as a whole. Prior to this, I thought season 3 (the last season aired on SyFy) was the show's best season. That season covered roughly the final half of book 2, Caliban's War, and the entirety of book 3, Abaddon's Gate, with the latter book being crammed into the season's final 7 episodes. (I say "crammed," but the writers did an admirable job of boiling that ten-pound doorstopper of a book down into seven episodes.) Then, after its cancellation by SyFy, the show was picked up by Amazon (thank all the gods). Seasons 4 and 5, with ten episodes each, have covered book 4, Cibola Burn, and book 5, Nemesis Games (although some characters/plot points from Nemesis also showed up in season 4). Now, I will preface this with the caveat that I have read neither Nemesis Games or book 6, Babylon's Ashes, so I'm not comparing streaming-Expanse to book-Expanse. But just taking Season 5 on its own, it was the show's best season to date.

To me, this was due to this season's focus on the characters. The protomolecule storyline that has driven the series from the beginning was taken a step back (except for the finale, where it roared back to threatening life), and each one of our four main protagonists--Holden, Amos, Alex, and Naomi, along with new regular Cara Gee, as Camina Drummer, Shohreh Agdashloo's Chrisjen Avasarala and Frankie Adams' Bobbie Draper--had their own story. This isn't to say the season didn't have its own overarching plot. It did, and it focused on the Belter terrorist Marco Inaros (the largest face in the background of the above picture). Among other things, Marco assembled his own Belter Free Navy, stole, hijacked and traded for Martian ships and tech, blasted his way through the Ring in the season finale...and slammed three stealth-coated asteroids into Earth. All of our main characters' storylines tied into this event. But I for one appreciated Steven Strait's Holden being featured less prominently this season, as it allowed the other characters to shine. Cara Gee, as Drummer, Wes Chatham as Amos, and Dominique Tipper as Naomi delivered powerful performances, and Tipper in particular owned episodes 7 and 8, "Oyedeng" and "Hard Vacuum." Wes Chatham's spotlight episodes were episode 2, "Churn" (which incorporated his Expanse novella of the same name that I haven't read), episode 5, "Down and Out," episode 6, "Tribes," and episode 9, "Winnepesaukee." This last episode also features a nail-biting, nearly one-shot running gun battle that I don't think I've ever seen on The Expanse before.

Now, I've seen people on Imbd complaining this season--or at least the middle--was slow, draggy, etc. To which I'm tempted to say, oh for fuck's sake, you have no idea the depth of what you're watching here. The entire season, to my mind, was very well structured, with definite peaks and valleys. There were riveting episodes like ep 4, "Gaugamela," (this is the ep where the asteroids actually slam into Earth, and it'll have you on the edge of your seat from start to finish) followed by more reflective eps that allow our characters to absorb what has happened and try to figure a way out of their predicament. These more reflective episodes, while not exactly lacking in action their own selves, delve into the characters in a most satisfying manner. For instance, in episode 6, "Tribes," Amos realizes just what his post-asteroid-impact struggle on Earth is doing to him and knows he has to get back to his family aboard the Rocinante as quickly as possible. No, Season 5 is not as full of action as Season 3 was. But the action that exists is well balanced with character moments and development, and to my mind delivers the superior viewing experience.

So: the two best episodes of the season were Episode 4, "Gaugamela," and episode 10, the finale, "Nemesis Games." For anyone wishing to nominate these episodes for awards, be aware that "Gaugamela" was released in 2020 (as an example, it's damn well going on my 2020 Best Dramatic Presentation Short Form Hugo ballot) and "Nemesis Games," airing this year, will qualify for 2021 awards. Next comes the two Naomi-centric episodes (there are others, such as episode 3, "Mother," directed by Thomas Jane, but these two are the standouts) "Oyedeng" and "Hard Vacuum." Amos has a triptych of episodes that I think are in the next tier: "Down and Out," "Tribes," and "Winnepesaukee." The remaining episodes, "Churn," "Exodus," (episode 1) and "Mother," I am placing at the bottom of my list, but this is not to say that they were bad. Far from it. I'm a bit ticked that Amazon released most of the episodes weekly instead of dropping them all at once, although I understand why they did it. But if not for that, I would have nominated the entire season for Best Dramatic Presentation, Long Form.

There is only one season left of this outstanding show. And to think, if it had not been for the Expanse fans petitioning Amazon after the series was canceled by SyFy, we would have missed the excellence of what we're seeing. For anyone who has not watched any of The Expanse, all five seasons are now available on Amazon Prime. Please give it a chance. You won't regret it.