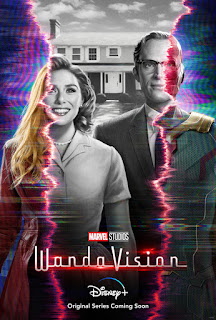 In this episode, WandaVision gets serious.

Whoever is running this series has an excellent grasp of pace. The first three episodes set up the wacky premise, with its decade-reflective sitcom jumps and slow expanding thread of horror, in three brisk half-hour increments. (I wonder if it's a coincidence that Disney Plus's first two original series, The Mandalorian and this program, are both knocking out their episodes in 30- to 40-minute time frames.) Last time out I was speculating which 80's classic sitcom would be referenced next. Instead, we get a full stop and a pullback that's more than a bit meta in that it involves the characters doing the very same thing we in the audience are doing--watching the episodes and trying to figure out what in the hell is going on. It's a clever little breather that answers quite a few questions while posing still others.

This episode, in its opening sequence, also focuses on something the Avengers movies never had the time or seemingly the inclination to do--the aftereffects of the Snap, Thanos' dusting half the universe in Infinity War, and the Blip, the restoration of said half in Endgame. In this case, the Blippee (sorry, couldn't resist) is Monica Rambeau, the daughter of Maria Rambeau, Carol Danvers' best friend in Captain Marvel. She is reverse-dusted back to life in her mother's hospital room five years later, not knowing that her mother has died in the interim. This is a very effective sequence of Monica dashing down the hospital corridor surrounded by chaos: people popping back into existence, filling the rooms and hallways, and overwhelming the hospital. Finally, a doctor who worked there previously spots Monica and explains what happened. I do wish this scene had gone on longer, as society coping with the aftermath of the Marvel superheroes knocking heads has been sorely lacking till now.

It's established that WandaVision is taking place three weeks after Endgame, when Monica returns to work at S.W.O.R.D. (Sentient Weapon Observation Response Division), the agency founded by her mother, presumably after the events of Captain Marvel. The agency's director says she's one of the first to return, even though it's obviously too soon, and he farms her out to the FBI on a missing persons case...taking place in the town of Westview, New Jersey. The FBI agent on the case turns out to be Jimmy Woo, from Ant-Man. He's looking for someone in the witness protection program (and we never find out who this is) who was in Westview, and who has vanished--along with the entire population of the town and everyone's memory of it. This is driven home when Monica and Jimmy have a conversation with two police officers while they are standing right in front of a billboard advertising Westview and the officers deny it exists. Monica sends a drone towards the town and it vanishes into an energy field. She approaches the field, touches it, and is sucked in herself.

24 hours later, there is a "multi-agency response team" set up around the town. This is where astrophysicist Darcy Lewis, from the first two Thor movies, comes in--she is part of a team summoned by the FBI to try to explain various readings captured by the team's equipment. The focus on the rest of the episode, except for the very end, is on Darcy and Jimmy Woo as the former solves some of the mysteries about Westview--it's Darcy who figures out that the high readings of cosmic background radiation emanating from the town are also hiding "longer wavelengths." She realizes this is some sort of broadcast, and sends the FBI underlings looking for an old "non-flat" television. She plugs this in, and voila, the team ends up being able to watch the exact same episodes we in the audience have been watching. This causes Jimmy Woo to utter one of the episode's best lines: "The universe created a sitcom starring two Avengers?" This is funny, but it's also sobering: Darcy confirms that Vision is "not Blipped, dead," and she is the one who sees Monica playing a character trapped inside the show.

The anomalies from the first two episodes are also explained: the first drone Monica sent in was transformed into the red toy helicopter with the SWORD logo, and an agent in a hazmat suit was sent crawling through the town's sewers to bypass the hexagonal-shaped energy field, only to discover it extends underground and changes him into a beekeeper, complete with surrounding buzzing bees, as he passes through it. (He climbs out of the sewer and Wanda sees him and rewinds reality just as she did in episode 2, and we never see what happens to him.) Jimmy Woo's is the voice we hear over the radio, also in episode 2, trying to reach out to Wanda.

Then we reach episode 3, where after the (accelerated) pregnancy and birth of Wanda's twins, Geraldine/Monica makes the mistake of mentioning Ultron to Wanda. At first the scene cuts out just as it did before. Darcy rewinds it, trying to see what is missing. Then an alarm goes off (signaling that the energy field has been breached, by Monica being tossed outside) and Darcy and Jimmy rush out to see what is happening. Alone in the tent, Darcy's laptop now shows the rest of the scene: Wanda realizes that Monica/Geraldine doesn't belong in her little bubble, and brings up her powers--those red glowing energy fields emanating from her hands--and slams Monica through several walls and out of Westview. This is ominous and sinister, but afterwards Wanda seems shocked and dismayed by what she has done (and Elizabeth Olson plays this beautifully) and quickly knits both the walls and her little reality back together. Then Vision, who has been outside talking to the neighbors, comes in and asks about Geraldine--only it's the Vision from Endgame, after his death, his synthetic flesh grayed out, his eyes whited over, and a gaping hole in his head where the Mind Stone has been ripped away.

Wanda turns around and sees him, and in that minute we know she realizes Vision is dead. But she quickly changes him back to his normal red-and-silver self. This zombie Vision seems to have at least some semblance of consciousness of his own, separate from Wanda, as he suggests that "we don't have to stay here. We can go anywhere." Wanda denies this: "This is our home. I have everything under control." She sinks back into the illusion and picks up one of the babies, asking what they're going to watch tonight. For the moment, Vision acquiesces, but in another nice moment from Paul Bettany, we can see the uneasiness rippling over his face. He knows something is wrong. Outside, Monica, lying on the ground after being thrown out, gasps up at the people surrounding her: "It's Wanda. It's all Wanda." In the very last shot, the camera fixes on Wanda and Vision holding the babies and sitting in front of the television, and the credits fade into Jimi Hendrix's "Voodoo Child."

Well boy howdy, talk about raising the stakes. This episode was very well written and paced, with the comic relief (and drama-free competence) of Darcy Lewis to balance the creeping horror of the end scene. The odd, fourth-wall-breaking moments of the first three episodes are brought into context, and the stage is set going forward. And all of this is only packed into (since the show's end credits are really long) twenty-six minutes. This was outstanding, and I can't wait to see where the show goes from here.