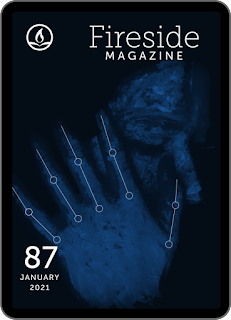 The January issue of Fireside Magazine is half the size of previous issues, thanks to a kerfuffle last year involving an unfortunate choice of audio narrator. Due to this, the editorial staff was shaken up and the paperback quarterly edition of the magazine (which I subscribed to) was discontinued. That's too bad, as the paperback was a handsome publication, but I can understand their reasoning.

"Mouth & Marsh, Silver & Song," by Wayfarer Ah Ola, falls in the former category, a lyrical tale of a leech monster who is also an oracle and a kingmaker. Princes come to visit her, slash open her flesh with silver weapons she cannot resist, and the mouths of her wounds pour forth songs and give them their crowns. She has no choice in this--until a princess comes to her marsh and asks the monster to make her a queen.

The contrast is thus drawn, between the men who demand and take and the women who ask and give. The leech monster learns who has the greater worth, and so does the reader.

(It's also odd that my ebook copy lists the author's name as Wayfarer Ah Ola, but the name is Sloane Leong on the website. I'm going with the one I received; if that's wrong, please let me know.)

“That Time I Found a Phone Booth Where I Can Talk to My (Dead) Dad," by Alisa Alering, starts out strong and kind of dribbles away to nothingness and nonsense in the end. The narrator goes for a walk and finds a Tardis-lite phone booth popping out of nowhere, with a ghost line straight to her dead father, gone for thirty-five years. The longer the protagonist talks to her father, the colder it gets in the booth and the more her recently diagnosed Raynaud's syndrome flares up. Her condition plays into the narrative, along with a huge murder of crows that turns the story into a horror tale at the end. Unfortunately, the sudden change of tone is ill-fitting and disjointed, and the abrupt ending even more so.