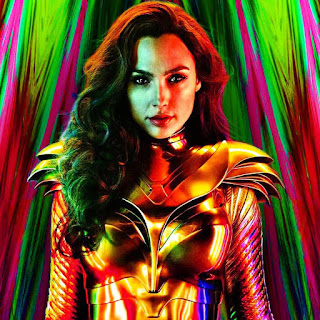 Wow, this movie was a disappointment. I hate saying that, but it's true.

The first Wonder Woman was one of my favorite movies of the past few years. Except for the overstuffed, over-the-top CGI of the third act, as an origin story for Diana, it worked. The scenes on Themyscira were wonderful. Diana sorely needed more women around her once she left the island, but her fish-out-of-water persona was funny and heartfelt, serving to show us the core of love and compassion that is Diana Prince. And of course, the defining sequence of the entire movie, No Man's Land, when Diana shed her untried Princess of Themyscira role and truly took on the mantle of Wonder Woman, was enough to bring tears to many viewers' eyes. So I was really looking forward to this, especially knowing that Patty Jenkins returned to direct it.

It gives me no pleasure to acknowledge that this movie is simply...not good.

There are three major problems with this movie. The first is the villains. The writers made a mistake in having two villains, as both of them come off half-baked at best, even with Pedro Pascal overacting his little heart out. (I suppose his fast-talking, google-eyed hamminess befits the movie's 80's setting, and of course he's also a thinly disguised [and prettier] version of Donald Trump, but it's a wonder there was any background scenery left by the time Pascal finished chewing it.) Kristen Wiig's Barbara Minerva/Cheetah had the better initial setup, but in the chaotic mess of the third act, she went completely off the rails. (Don't get me started on the murky, poorly-lit, patent awfulness of Diana/Cheetah's final fight.) It's too bad, as she struck me as potentially being the more interesting character and villain, if she had been properly developed and written. The key to her character, I think, was her "people like you" rant to Diana when they first fought, and her combination envy and hatred of Wonder Woman, even though she had wished to be just like Diana Prince. This dichotomy could have made a great contrast and foil for our hero if the screenwriters had really delved into it, even though it would have meant a major reworking of the entire script.

(But then again, the entire script, with the exception of the majestic opening sequence, felt like a rushed first draft. Also, it's set in the 80's, for frak's sake! Where's the 80's music?? They don't even have any 80's music playing in the mall! Even one song, like Led Zeppelin's "The Immigrant Song" in the middle of Thor: Ragnarok, could have better defined the movie. At the very least, when the fake Ronald Reagan came onscreen, they could have used Genesis' "Land of Confusion." I mean, this movie cost what? $200 million? They damn well could have spared a few million, or whatever, for music rights.)

The second problem is the central MacGuffin, the Dreamstone. The writers try to give this a twist by saying it's imbued with the magic of a trickster god, making it "wishes with tricks" (which made me wonder if Loki would show up...oops, wrong studio). However, when Pedro Pascal's Max Lord basically swallows the damn thing, turning him into a walking, bleeding Monkey's Paw, the concept falls completely flat. In the bad third act, when everybody on Earth is spewing their nastiest, most secret wishes, the murderous, amoral impulses most of us attempt to stifle, it was cringing enough to make me "wish" someone would request to blow up the planet and be done with it. Of course, that's almost what happens....

But the third problem, the one that really really bothers me, is how Steve Trevor was brought back to life. Diana is shown to be still pining for Steve (and I tend to cut her a little slack here...since she's functionally immortal, over 65 years for her would be equivalent to a few months, or a year, for us), and after her conversation with Barbara Minerva where she's asked if she was ever in love, naturally her thoughts are with Steve. So when she holds the Dreamstone, her fondest wish is that she could see him again. This is understandable. What is not understandable, to me, is the way the Dreamstone brings him back. Instead of constructing him a new body, a body fueled by Diana's powers (which would have been in keeping with the plot as presented, as Steve's presence slowly drains Diana and makes her vulnerable to harm), the Dreamstone recreates his mind and spirit...and inserts it in some other poor sap's body.

For crying out loud. Did no one stop to think how bad this looks? This poor guy is taken over and used without his consent, and it's treated as a joke. I can only suppose it was in the service of a clever meet-cute camera shot, as the camera slowly revolves around Diana and the stranger calling her out with Steve's lines from the first movie, until the second or third time around when Chris Pine's face appears and Diana realizes who it is. But though we have Chris Pine in the role (because he has second billing, har har), we're shown that Diana, and everyone else, actually sees the other man's face and body, because that's what reflects back in the mirror. So this man is taken over without his permission or knowledge, and we know nothing of how it disrupts his life. (Apparently he doesn't remember anything that happened during this time, as the same actor is shown in the sickly-sweet final Christmas scene.) And finally...Diana has sex with Steve in this man's body, knowing this. This is, to put no fine point on it, simply awful.

Unfortunately, Patty Jenkins has a co-writing credit on this script. I am shocked and dismayed that she signed off on this. It's not right, and it's not funny. It's also fucking unnecessary. If the magical MacGuffin could create several dozen nuclear weapons out of nothing from Ronald Reagan's Alzheimer's-addled mind, it damn well could have constructed Steve Trevor a new body.

Now, are there any good things in this movie? Amazingly enough, there are. The opening sequence, with a young Diana running an obstacle course that is the equivalent of a "Themyscira Ninja Warrior" contest and learning a lesson about taking shortcuts and the truth, is magnificent, wonderfully shot and edited. It recreates the spirit of the first film in a manner the rest of Wonder Woman 84 sorely lacks. Chris Pine has the same effortless chemistry with Gal Gadot, and the snippet of him parading various 80's wardrobe choices got a chuckle out of me, at least (although I think that's the only time I laughed). Finally, the end-credits cameo was delightful.

But as for the rest....I'm glad I didn't see this in the theater, even if I could have. (As a matter of fact, I snagged a two-week free trial of HBO Max after a purchase at Best Buy, so I actually didn't pay anything to watch it.) I hope this film doesn't sink Wonder Woman III, but I wouldn't be surprised if it did. Patty Jenkins and Gal Gadot really need to rethink their character and world after this debacle.