This episode was good in that it was fast-paced and moved the plot forward, but bad in that it was only 36 minutes and didn't give the viewer (or the characters) time to absorb what was revealed. It was directed by Bryce Dallas Howard, the second episode she's done for the series, and the episode as a whole was definitely an improvement over the first one she did. It flowed well and was edited well, and the shots and cinematography were better. I just wish it had five or ten more minutes, and maybe a couple of scenes, added to the runtime to let the myriad reveals soak in.

Furthermore, a couple of those reveals didn't make much sense unless you've also watched the animated series Star Wars: Rebels  and Clone Wars. Which I haven't. I only realized why the Star Wars geeks were jumping up and down over mention of a particular name after reading other reviews. That's fine--I presume I'll learn about that person when they finally make their appearance. Still, I think it would behoove showrunners Dave Filoni and Jon Favreau to remember that not all viewers of The Mandalorian have watched every single thing that came before.

At any rate, this episode picks up right on the heels of the last, with the poor battered Razor Crest finally limping in to the water world Trask. After a hairy manual dive to the floating spacedock, Mando delivers Frog Lady to her husband in a touching reunion. (And also after Mando sets down on the dock, pronouncing the landing "nice and easy," the ship promptly falls off the edge into the water. [Good thing that cockpit was pressurized and waterproof.] A modified AT-AT walker, the same kind seen in The Empire Strikes Back, had to pluck the poor kelp-draped ship out of the ocean. I rather like these reminders that at least half the time, our hero Mandalorian is a hapless fuckup.) He's directed to a dockside tavern--and in the background, we see a mysterious woman watching him and then disappearing--where he orders a bowl of chowder for Baby Yoda and asks the server where to find more of his kind. Baby Yoda's bowl of food is delivered from a thick tube snaking out of the ceiling, and our favorite foundling picks up his spoon and leans over it, ready to dig in--and out of the thick gloppy liquid comes a miniature squid thing to attach to his face, a la Alien. Which only elicits one comment from Dadalorian: "Don't play with your food," as he plucks the thing off baby's face and drops it back in the bowl. 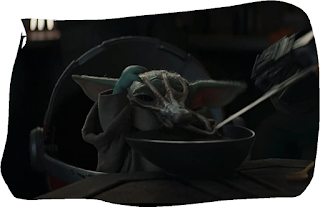 (Sorry, that's a little bit crooked--I made it with Windows Snipping Tool.)

(This episode was written by Jon Favreau, as were the first two episodes of the season. I love his flashes of dry humor.)

In response to Mando's inquiry, a tentacle-faced being that looks like a descendent of Cthulhu comes over and says he can lead Mando to other Mandalorians. Before I had a chance to say "OH MANDO NO WHAT ARE YOU DOING," we cut to Mando and baby on board a ship. The tentacle-faced species, called the Quarren on my closed captioning, ask Mando, "Ever see a mamacore eat?" as they open up a watery hold in the ship's center. He pushes Mando to let Baby Yoda watch, saying "the kid'll like it," as he lowers a net and dumps some fish into the hold. Baby Yoda's pram floats close to the edge and he leans over to watch--and the Quarren kicks the pram over the edge as the beast inside comes up to feed (although we see baby quickly press the button to close the pram's hatch). The huge beastie inside swallows Baby Yoda whole, and Mando dives in after him.

The Quarren quickly close the bars over the hold, revealing this was a plot to drown Mando and take his armor. They seem well on their way to doing just that, as Mando tries to surface in the narrow band of air under the bars only for the Quarren to poke at him with harpoons to push him back down. But they're interrupted by the sight of three Mandalorians jetting to the deck and kicking the Quarren's asses. They open the hold and haul Mando out, and after he chokes out, "Help the child," one of them dives in to rescue baby. She pulls Baby Yoda and his somewhat crunched pram out of the water, and gives him back to Mando.

Mando says he has been looking for other Mandalorians because he has been tasked to deliver the child to its kind, and the lead Mandalorian takes her helmet off, to reveal a redheaded Katee Sackhoff (formerly Starbuck on the Battlestar Galactica reboot). Of course this offends Mando, who jumps to his feet, demanding "Where did you get that armor?"

"It's been in my family for three generations," she replies, naming herself Bo-Katan Kryze, and them proclaims him a "Child of the Watch," a member of a splinter fundamentalist Mandalorian faction. Now this is what I mean about this episode needing some more time to breathe, as this is the sort of revelation that would have shaken Mando to the core, and he should have had some time to process it (and at the very least, ask Bo-Katan a helluva lot more questions). He does seem to be upset, as he immediately jets off. The three non-Watch Mandalorians blow up the fishing ship and follow.

Which is a good thing, as after Mando reaches the dock he's attacked by relatives of the fallen Quarren and Bo-Katan and her companions have to rescue him again. Bo says she can give him the name and location of a Jedi if he helps them out with their mission--stealing weapons from a freighter soon to lift off. Mando agrees, and drops Baby Yoda off with Mr. and Mrs. Frog, giving him strict instructions to "be respectful and mind your manners" (i.e., don't eat any more of the Frog couple's eggs).

The remainder of the episode is given over to the Mandalorians' assault on the freighter. It's tightly written and shot, and again may I say that Bryce Dallas Howard does an excellent job directing it. The four Mandalorians pretty much mow down all the Stormtroopers on board, even opening up a cargo hatch and spacing a bunch of them after they're unwisely trapped in the "cargo control area." In the middle of the fight, Bo-Katan reveals she left out a few salient facts about her description of the original mission--she's not just going to hijack some of the weapons, she's going to commandeer the ship itself. (Mando objects, but she informs him the terms have changed, smugly repeating the Mandalorian creed: "This is the Way.") At that point the captain, realizing his goose is probably cooked, makes contact with someone asking for backup--and we see it's our good friend Moff Gideon from Season 1. The Moff denies the backup and orders the captain to crash the ship rather than let the pirates have it.

The captain throws the freighter into a steep suicide dive, and Mando and company reach the bridge just in time to prevent it from crashing into the ocean. (Bo-Katan, revealing she is also looking for the stolen Darksaber, tries to interrogate the captain as to its whereabouts, but he swallows a suicide capsule rather than answer her.) Afterwards, Bo-Katan once again asks Mando to join them. He refuses, reminding her he has to settle Baby Yoda first. At that point she gives him the name of the Jedi that has everyone jumping up and down and yelling: Ahsoka Tano, from Clone Wars.

The last scene has Mando and baby returning to the Razor Crest, which looks like it was "repaired" by space netting inside and out. I do hope the poor thing holds together once it clears the atmosphere...Mando lifts off, and the planet's last gift is an alien squid which looks at Baby Yoda and starts to pounce, only for Mando to reach out and snatch it out of the air. So Baby Yoda gets a good meal as they leave.

Since there's still five episodes to go, I don't think they're going to catch up with Ahsoka Tano right away? It seems like that should be saved until the last or next to last episode. And they definitely need to address how Mando is going to deal with what's been revealed to him. Regardless, this was fun, if a bit too jam-packed.