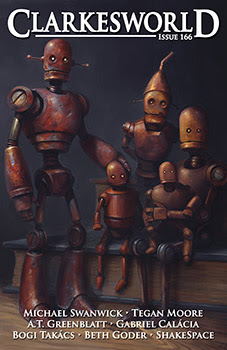 Clarkesworld Issue 166 by Neil Clarke
My rating: 4 of 5 stars

This issue has three really good stories, and the non-fiction section offers an interesting article about the human genome.

A nice character study of an artificial person and his relationship with his creator. This unfolds over decades because at first Raphael is considered "property" and is switched off for updates or just because his creator, Dr. Leonidas Erdmann, feels like it. Raphael is given no choice in the matter. But after Dr. Erdmann dies and his freedom is granted, Raphael takes steps to live his life the way he wants.

My favorite story in this issue. This is a post-apocalyptic tale of sorts, perhaps a post-climate-catastrophe or post-pandemic, as there seem to be few humans left and bots to take the place of species that are apparently extinct. The worldbuilding is a bit vague, and that's deliberate on the part of the author, as the theme of this is the power of stories. The stories passed down to the unnamed narrator are bleak and depressing, and the protagonist's final epiphany is the realization that they don't have to give in to that pessimism; they can choose what their story will become.

"Three Stories Conjured From Nothing," Shakespace, translated by Andy Dudak

This story's title is apropos, because I didn't care for it at all. The settings didn't make sense and the three stories (not really stories, just fragments) had nothing to do with one another.

This had some fairly clever worldbuilding, but I couldn't really connect with the main character, which kind of made the whole thing moot.

More clever world building and a hard SF premise, with the main character working at a research lab ten miles below the surface of the ocean of Europa. This started out well but turned into a real downer, and the ending didn't help.

A cute story about aliens trying to interpret a culture gesture of humans (in this case, kissing).

"The House That Leapt Into Forever," Beth Goder

This starts out a little reminiscent of Ray Bradbury's "There Will Come Soft Rains," about a sentient house carefully maintaining its rooms and its one remaining inhabitant. Except we slowly come to realize the "house" isn't a house, and the house is on this barren moon for a reason, and its remaining inhabitant, Doom-May-Come, is not as benevolent as they seem. This very short story drips with atmosphere and creates a wonderful sense of creeping dread, turning into horror, in just over three pages. Well done.

The author, an Assistant Professor of Biology at Baltimore's Morgan State University, tackles the problem of BIPOC underrepresentation in human genome research. This gets a little bit into the weeds, but it's quite interesting.

I enjoyed the Swanwick and Greenblatt stories as well.