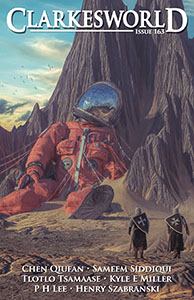 This is another issue with a really cool cover, done by "Beeple" (AKA Mike Winkelmann). I took a picture of the back cover for contrast. It's zeroing in on the figure in the suit and is more than a little creepy. 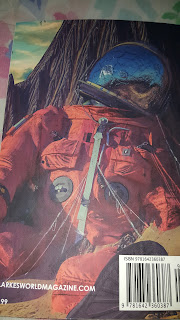 Story-wise, there's some weird stories in this issue. The first, "Distant Stars" by P.H. Lee, is perhaps the most conventional, contrasting a theory of linear motion with a mother's love for her son, who gradually becomes--not quite estranged, but further and further distant from her. The ending is pretty sad.

This story is definitely for anyone who's a foodie, as there are greatly detailed descriptions of cooking Urdu dishes. Otherwise, this extrapolation of AirBnB where people rent bodies instead of houses wasn't terribly impressive, at least to me.

This is one of the weird stories I mentioned earlier. Seriously, I didn't quite know what to make of this. It was sideways and surreal and had a bit of a "Matrix"-y feel to it--just substitute "Neo's pod" for "L's leaf." Sometimes you want to see the worldbuilding wizard behind the curtain, but in this case I didn't, because I'm pretty sure seeing the larger world would make even less sense than this story does.

This was brutal, the story of a new, futuristic level of domestic abuse and gaslighting. In the end, the woman kills her abuser, and you fully understand and applaud (or at least I did) her doing so. It is very disturbing, however, and probably should have come with a content warning.

I didn't like this as well as the previous story by this author, the excellent "The Ancestral Temple In a Box." This story of corporations and their 'blockchain technology' to encode one's individual debt into their very genes and the lengths said corps will go to to ensure their asteroid miners' debt is never paid was more than a little depressing. There was some small amount of triumph for the main character in the end, but for me, that wasn't enough to lift the black clouds of all that came before.

This was another surreal and sideways sort of story, but it was better written and somewhat more coherent than the first. It's a weird blend: the characters refer to "witches," but some of what they do, and the story's portrait of the ruined city of the patternmakers, sounds more like dressed-up artificial intelligence, robots and nanotechnology. In any event, it's a nice story to end the issue with (or at least the fiction part thereof).