Streamin' Meemies: "We Face It Together," She-Ra and the Princesses of Power, Season 5 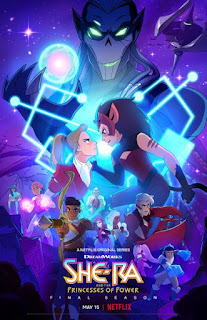 This was the final season of the rebooted She-Ra and the Princesses of Power, and while I never watched the original 80's version, I thoroughly enjoyed this. This is children's TV, but there is a lot here for adults to enjoy--and in this final season, showrunner Noelle Stevenson turns the story and characters in a more adult direction.

The first indication of this is She-Ra's new look. 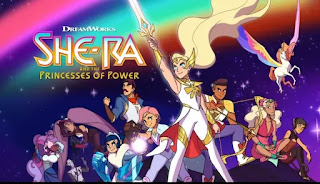 Gone are the girly shorts from She-Ra's earlier iterations (which also caused an uproar in some quarters when the reboot was first announced). In the first three episodes of the season, Adora is no longer She-Ra after breaking her sword in the Season 4 finale. She is struggling to become She-Ra again without it. In her dreams in the first three episodes, she pursues a white faceless figure which we eventually see is the She-Ra inside her. A specific trigger is required for her to access this She-Ra (which I will get to), but when she does re-manifest, in episode 4, it is with this more mature outfit.

(I snagged this screenshot from the Io9 website, and the comments pointed out something I hadn't noticed, since like most people bingeing the series I skipped the intros. This is from episode 12, and if you look in the lower left hand corner you will see two characters mostly glossed over in earlier seasons [Netossa and Spinnerella, a married couple that gets brought forward prominently this season], in a rather sultry embrace. Nothing like this is shown in the actual story, but we are definitely not in Kidland anymore.)

This season had a lot to wrap up: the Big Bad, Horde Prime and his army of clones, is revealed, and Glimmer is kidnapped by him; Bow, Adora and Entrapta (an absolute delight the entire season) launch into space on board the First Ones' ship to rescue her; we find out just what the Heart of Etheria is and how it involved the original First Ones; the Rebellion is scattered and beaten down, trying desperately to rebound; Horde Prime has chips that his army implants in people's necks, to bring them into his hivemind, including several of our beloved characters--particularly Mermista, Scorpia, Spinnerella and Micah, Glimmer's father; Adora has to free the Heart of Etheria and use it to overthrow Horde Prime's army, possibly at the cost of her own life; and in the midst of all this mayhem, our favorite frenemy, Catra, has her final change of heart and rescues Glimmer from Horde Prime's ship, and is herself rescued by Adora.

And those are just the plot twists. The character development deserves another paragraph. Noelle Stevenson was juggling a great many balls this season, and it's a credit to her and the show's writers that in thirteen 25-minute episodes, roughly five and a half hours of story, she brings all this home and wraps it up in a most satisfying manner.

The themes this season are friendship, forgiveness, and love, summed up in Bow's emphatic declaration to Adora: "Whatever it is, we face it together." That is the first lesson Adora has to learn. In the first few episodes, she is no longer She-Ra and has to let go of her feeling of invulnerability (and frankly, her hubris) and rely on her friends. Bow becomes more assertive this season--a most welcome development, since I thought he was pretty shortchanged in Season 4. Glimmer has to learn from the many mistakes she made last season, and she humbly asks Bow's forgiveness for not listening to him. (In one of the show's minor missteps, Glimmer's break with Adora was mostly glossed over, especially contrasted with the length of time it took her to reconcile with Bow.) Entrapta--just about my favorite character this season--admits she's not good with people, and was using her tech to make people like her, only to realize that people like her because of her, not just her genius with First Ones technology. Scorpia speaks up for Entrapta, and even the droll, sarcastic Mermista--also a bit shortchanged this season--comes around to accept her.

Then, of course, in keeping with the more adult themes this season, there is the final reveal in the last episode, which anyone paying attention could have predicted was coming from the get-go. It took quite a bit of delicate, sneaky setup from Noelle Stevenson, but she fought for it and pushed it on through.

SPOILER---SPOILER--SPOILER--past a screenshot of Entrapta. 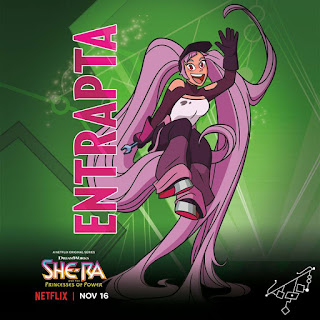 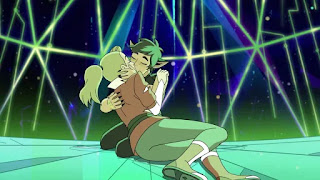 Yes. In the final episode, "Heart Part 2," Catra admitted her love for Adora, and Adora reciprocated. Their shared feelings literally save the universe, as love for her friends and Catra is the only way Adora can tap into She-Ra now that her sword is broken. Right after this scene, the First Ones' control over the Heart of Etheria is shattered, the destruction of Etheria is stopped, and Adora, as She-Ra, emerges and kicks Horde Prime's ass.

Now, there is a case to be made that this was a bit rushed. After all, the show dwelt quite a while on Catra's toxicity and selfishness, and made a point of breaking her and Adora's friendship over it. As Adora herself says on more than one occasion, "Catra's hurt a lot of people." Yet everyone (mostly) accepts her back. I would have liked maybe another entire episode, or at least a few scenes, showing that Catra's forgiveness wasn't that easy.

Nevertheless, these are, in the end, minor quibbles. (Also, as far as pairings go, Bow and Glimmer's burgeoning romantic relationship also felt a bit out of left field, although in re-watching the series I will admit it was foreshadowed, albeit pretty thinly. However, Sea Hawk and Mermista? Sorry, I don't think so. I'm sure after she recovered from getting chipped, she told him to get lost.) This was a fine show, with richly layered characters and great payoffs in the final season. I suspected Noelle Stevenson could do no wrong before, and I know it for a fact now.