I had high hopes for this week's episode after last week's excellent "The Impossible Box," but unfortunately those expectations were not entirely met. That's not to say this episode was bad. The characterizations, which is this show's strength, were on target, and the acting was mostly very good. But there were a few plot holes that tripped this episode up, and one plot point in particular had me vexed!--Vexed, I say!--

Why he was met even now
As mad as the vexed sea, singing aloud,
Crowned with rank fumiter and furrow-weeds. (King Lear, Act 4)

--which I will get to. (Yeah, I had to put in something Sir Patrick Stewart would appreciate.)

This episode takes place mostly on the planet Nepenthe, where Picard and Soji fled via the Borg spatial trajector, in what Picard terms an act of desperation. Riker, Troi and their daughter Kestra (a neat callback to TNG, as Kestra was the name of Deanna's deceased older sister) live there. What follows is a series of scenes where both Troi and Riker immediately figure out Picard is in trouble and urge him to stay as long as he needs; Riker speculates about what is going on, quite rightly, even deducing that Soji is an android (via her unconscious tilt of the head which is just like Data's); Soji works through some serious and understandable trust issues, finally coming clean to everyone about what happened on the cube between her and Narek; Kestra and Soji bond; Troi gives Picard a much-deserved dressing-down, reading him the riot act over Soji (by my count, this is the fourth time various characters have ripped Picard new ones. Maybe this time he'll listen?); and as everyone sits around the dinner table brainstorming what to do next, Kestra discovers where Soji's "homeworld" is.

All these scenes are well written and very well acted. For someone who reportedly hasn't acted in about a decade, Jonathan Frakes slips back into Will Riker's skin with admirable ease, holding his own with Sir Patrick Stewart, as does Marina Sirtis. (Although I'm slightly peeved that they still couldn't resist dressing her in a cleavage-displaying blouse.) The pleasant discovery here is Lulu Wilson as Kestra, playing a completely believable pre-teen who is still in mourning for her brother Thad, who has recently died to a rare disease. (There's a nice scene between Troi and Soji where Deanna describes Thad's disease and reveals that he wasn't cured because the cure to this "silicon-based virus" requires a culture in a positronic brain, which couldn't be done due to the ban on synth research. I'm thinking, huh? That's some major technobabbling handwavium. But the emotion from both actors in this scene carries it through.) Kestra's and Soji's interactions are a delight, and Kestra is really the one who gets through to Soji and allows her to begin to trust Picard. This episode takes the time needed for both Picard and Soji to process their changed circumstances and what has happened to them so far and adjust.

This doesn't mean we don't see a fair amount of action, however. The opening scene is a flashback to when Commodore Oh met Agnes and recruited her to infiltrate Picard's mission, and convinces her with a forced mind meld. (Yeah, Agnes says, "Okay, but," but it happens so fast this isn't really consent. This also establishes that Oh is Vulcan, since Romulans can't do mind melds.) Oh projects images of nuclear mushrooms, exploding planets and rampaging synths into Agnes mind--though I'm wondering if these are real or something made up to manipulate her--and Agnes agrees to swallow the tracker Oh gives her and serve as Starfleet's (really the Zhat Vash's) spy. This comes into play in this episode, as back on the La Sirena Rios is trying to break free of the Artifact and head off to the rendezvous at Nepenthe. Narissa lets them free because she is aware of Agnes' tracker, setting Narek up to follow them. Agnes, meanwhile, is being eaten alive by her guilt over Maddox, especially when Rios tells her he suspects Raffi has a Romulan tracker. Agnes almost blurts out that Raffi isn't the betrayer. While Raffi and Rios are trying to shake Narek off their tail, Agnes uses the replicator to generate an injection which will dissolve the tracker (and possibly kill her) and injects it. Our Emergency Medical Hologram, previously missing in action, appears as she slips into a coma. But the tracker is taken out of action and Narek loses them, and they are able to warp away to Nepenthe.

Now, I'm going to provide a spoiler space to discuss the remaining plot thread in the episode. Proceed at your own risk. 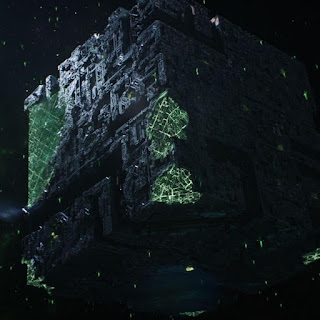 I talked about "plot holes" earlier, and the biggest one is what seems to be a missing scene on the Artifact. Right at the end of "The Impossible Box," Elnor and Hugh are seen facing down the oncoming Romulans, with Elnor ordering Hugh to get behind him and warning his enemies with what appears to be the traditional Qowat Milat invocation: "Please, my friends, choose to live." But at the beginning of this episode, Narissa has Hugh lined up with his ex-Borg patients with no indication of how everybody got there. Narissa does spout off a line about how they found four dead guards, but where the hell is Elnor? And how did he and Hugh get separated? Elnor doesn't show up until after Narissa has threatened Hugh and killed all his XB's.

After this loss, Hugh is apparently determined to return to the Queen's chamber and reactivate the whole damn Artifact to take it away from the Romulans, which gives Narissa the excuse she is looking for to kill him. Narissa and Elnor begin to fight, but Narissa tricks Elnor into sheathing his sword and fighting without weapons--by returning her huge-ass blaster to its holster--and of course she then pulls out a knife and flicks it into Hugh's throat. Elnor pulls the knife out and throws it back at her, but she beams away and Hugh dies, after telling Elnor an XB is needed to activate the Queen's chamber (which is presumably why we see Seven of Nine again in the previews for next week's episode).

Well, shit. This seems totally unnecessary. Jonathan Del Alco played it well, but I got the sense that Hugh was fridged just to yank Elnor out of his Qowat Milat naivete. Sure, he's trained for years at the monastery on Vashti, but was he ever in a real battle before? One gets the impression not, as otherwise he'd know better than to trust anything coming out of a Tal Shiar/Zhat Vash mouth.

Also, after Hugh dies and Elnor is alone on the Artifact, he is hiding under the catwalk and just happens to find a dangling Fenris Ranger SOS signaller? Really? Maybe this is the same one Seven gave Picard, but if so we should have been shown Picard passing it along.

These things may be niggling compared to the excellence of the scenes on Nepenthe, but they were enough to leave a bit of a sour taste in my mouth. I hope we get some justice for Hugh. If anyone can do it, Seven of Nine will.