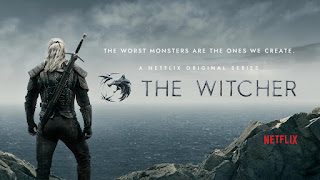 I knew nothing about The Witcher before it appeared on Netflix. I have neither read the books nor played the games (I'm not much of a gamer). But there was quite a bit of buzz about it on websites I frequent, so I decided to give it a try.

Now, apparently, The Witcher has taken the world by storm. Supposedly it has even more streams than The Mandalorian, which is something of a feat. I guess you could say Geralt of Rivia "tossed the coin" heard round the world.

(Yes, I occasionally unleash terrible puns in this space. To make you feel better, here is Baby Yoda playing the infamous song. There are all kinds of mashup videos on You Tube, and this is one of the longest.)


This is one of the few Netflix series I have deliberately went back and rewatched. Not for love's sake (although I might do that too), but simply to make more sense of it. If you have heard anything about The Witcher, it's probably the fact that the Season 1 timeline is convoluted, to put it mildly. As soon as I started my second watch, I could pick out the clues (most in dialogue, with a few physical tipoffs like a brunette Mousesack--the mage of Cintra-- in one episode becoming a grizzled greybeard in others). There are three different timelines, with Yennefer of Vengerberg's the longest, Geralt's in the middle--although I gather he's at least as old as Yennefer, if not older: magery and witchery does seem to prevent aging on the Continent, at least until a sword cuts you open. The shortest timeline is Princess Cirilla's, and as such it is rather streeeeeettttchhhhhhed over the course of eight episodes. But everyone is lined up and intertwined at the end.

Henry Cavill is our Geralt, and he is most pleasant to look at, whether in baths or out. He gets a tremendous amount of mileage out of his two favorite phrases, "hmmm" and "fuck"--it's even more efficient than "I am Groot." He makes a point in his storyline of refusing to kill things except when absolutely necessary, which would seem to put him at odds with his supposed profession. He would dearly love to bail out of the Witcher train, I think, but he's been caring about "monsters and money" for so long he doesn't have any idea how to care for anything else...until he meets Yennefer and his "child of Surprise," Ciri.

Yennefer of Vengerberg, played by Anya Chalotra, is the second protagonist, and in many ways she's the lead. A sorceress discovered and whisked away by Tissaia of Aretuza when young because of her ability to generate "portals"--instant transportation gateways to other parts of the world--Yennefer is deeply flawed and fascinating to watch. She is ambitious and power-hungry, and trades away parts of her body for even more power. (This is viewed as problematic by some, that she gave away her womb and ovaries for power and beauty and thirty years later decides she wants her fertility back. Yet even in the two or three episodes where this is talked about, she never comes out and says, "I want a baby." Tissaia and Geralt beat her over the head with the subject, assuming they know what she is thinking, but those words never leave her mouth. Instead, she says, "I want the choice," and "I want everything"--the latter, pretty forcefully at times. She never denies that a court mage's lifestyle is hardly compatible with parenting. So while that "everything" might include a baby, I think it's the possibility that she wants rather than a child in and of itself. At least, that's the vibe I got from her.) She is also, during the first three episodes, suffering from a twisted spine due to her quarter-elven hybrid blood, which is cured during the same ritual that cost her her reproductive organs. I'm not qualified to wade into the (possible) ableism in this, but just be aware that plot point is present.

The third protagonist is Freya Allan's Princess Cirilla, or Ciri, the Lion Cub of Cintra, whose kingdom is destroyed and her grandmother Queen Calanthe killed in the first episode, and who is sent fleeing from the castle in search of her "destiny," Geralt of Rivia. The complicated backstory of this plays out across the entire first season. Ciri is very young (supposedly twelve, although the actor looks three or four years older) and sheltered, and possesses a magic power she was seemingly unaware of and cannot control. She spends the entire season running and hiding from her Nilfgaardian pursuers (and meeting up with various humans, shapeshifters, elves, and other beings along the way, including some fantastic, badass Dryad Amazons), until she finally finds Geralt in the last minutes of episode 8. It's never revealed what she actually is or why everybody wants her. Presumably season two will get into this.

The main takeaway I get from The Witcher, which struck me from the first episode, was the great and varied number of female characters. Sorceresses, princesses, queens, ordinary people, even a pair of black dragon shapeshifters (in episode 6, "Rare Species"). So. Many. Women. It was so refreshing. I'm bloody tired of "Smurfette Syndrome" (I'm looking at you, Rogue One) where there's only one major female character--and furthermore, there's no justifiable in-story reason for there being only one major female character. With the tremendous number of women in The Witcher, we can run the gamut of humanity, as we should. Good, bad and in between; black, white and gray (in terms of moral code, not color); innocent and cynical; royalty and commoner. My second favorite character is Ciri's grandmother, Queen Calanthe, who was not a terribly nice person; she is impulsive and manipulative. But damn, she was great to watch. Additionally, all of these women have their own storylines, wants, and desires, and they're clearly not there to serve the interests of the male characters. It's such a breath of fresh air, I can hardly believe it. (And yeah, the showrunner is also a woman, Lauren Schmidt Hissrich. That might have something to do with it? Ya think?)

(Having said that, I really hope they dial back the nudity in Season 2. I don't think it's particularly gratuitous--well, the sorcerer Stregobor's nude live female garden gnomes in episode 1, "The End's Beginning," is a bit cringe-inducing, as is the castle orgy in episode 5, "Bottled Appetites," even if the latter does provide one of the funniest moments in the series: Geralt striding between all the writhing bodies to Yennefer, holding up a pitcher, and deadpanning, "I brought you some apple juice." Or at least, if they feel so compelled to show Yennefer's breasts, they also show Geralt's rear end, if not his dangly bits. I think Henry Cavill would be up for it.)

I suppose this could be viewed as a low-rent Game of Thrones (and I must say, I've got to be just about the only person on the planet who has never watched that or read the books). But I think The Witcher has a campy charm all its own. It definitely has a secret weapon: the music. The soundtrack is going to drop 1/24, including the current planetary earworm, "Toss a Coin To Your Witcher." Here's a video with lyrics:


And here's a very good metal cover of said earworm:


I don't know if this show qualifies as high art, but it's certainly entertaining. And there's a lot of Hollywood screenwriters and showrunners who could follow its lead and, y'know, include more women. Come on, we're fifty percent of the population! Witness us!
Posted by Bonnie McDaniel on 1/22/2020