In the Blu-Ray Boudoir: Avengers: Endgame 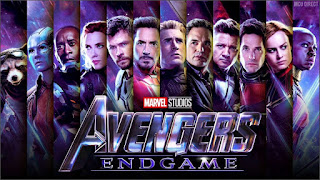 Yeah, I finally did get around to this. Obviously I had to wait until it surpassed Dances With Smurfs Avatar as the highest-grossing movie of all time. And a movie with a three-hour runtime is best watched at home anyway, to allow for snack and pee breaks.

So I'm not going to bother with spoiler warnings. Y'all should know what happens in this film by now. 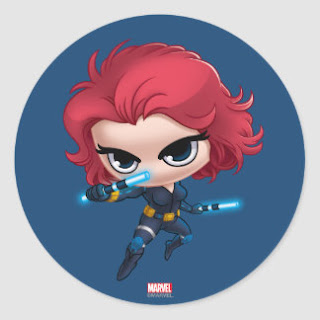 I wanted to put this here because in my not so humble opinion, Natasha Romanoff is the character who got screwed over the most in this movie. Which I will get to.

Avengers: Endgame is, of course, the culmination of ten years of the Marvel juggernaut, the second part of a story where our heroes battle a Mighty Purple Chin-Rake....err, Thanos. Thanos kicked everyone's butts in Infinity War, and Endgame is the tale of the Avengers (which swells to include seemingly every character ever seen or glimpsed on screen in the Marvel universe) coming together to undo the damage and annihilate his amethyst ass.

This involves a great deal of furious handwaving about the "quantum realm" and time travel, which Dr. Bruce Banner (who is quite charming in this movie, as he has merged with his alterego snarlface buddy the Hulk to create a confident and erudite singular being) tries to explain to no avail. I won't even attempt to untangle it, and you shouldn't either, as the tiny parts which actually make some sort of sense are promptly undone by the film's next-to-last scene. Steve Rogers goes back one more time to return the Infinity Stones (and also Thor's hammer,  in a weirdly unremarked bit) to their pre-heist times and places and ends up living an entire lifetime in the past--evidently in an alternate timeline--with Peggy Carter. (Exactly how he returns to the main timeline as a well-preserved centenarian to give Sam the Captain America shield is an exercise left to the viewer's imagination.) But he gets his closure, and so does Tony Stark, in an infinitely sadder way.

(I really hope Marvel pushes for an Oscar nomination for Robert Downey Jr. Sure, it's a superhero movie, and the Academy will probably look down its snooty arthouse nose at it, but RDJ gives an excellent performance in this film. In the final battle, when the newly resurrected Doctor Strange looks across at Tony and holds up one finger, you can see the knowledge of just what that one path in 14 million to defeating Thanos involves, and the price Tony will pay, drift across Downey's face in those few riveting seconds. And then he steps up and does it anyway.)

This movie is three hours long, but the convoluted storyline pretty much demands it. The final battle--hell, the entire final hour of the film--is over-the-top CGI, but that's standard operating procedure for superhero movies nowadays. The revelations fly thick and fast, including Steve Rogers being able to wield Thor's hammer (cue Thor: "I knew it!") and all the suddenly resurrected Snapsters flooding through yellow glowy spiral portals opened by Doctor Strange and his merry band of sorcerers. Peter Parker bounces onto the battlefield chattering in his adorable nerdy teenage manner, gets a hug from "Mr. Stark," and says hi to Captain Marvel (who would totally have smashed Thanos if he hadn't pulled one of the Infinity Stones off the gauntlet and used it on her). Robert Downey Jr. gets a great last line, after summoning the Infinity Stones off the gauntlet Thanos has finally picked up and making them reappear on his own (how this is done is also left as an exercise for the viewer). In reply to Thanos' full-of-hubris statement, "I am inevitable," Tony Stark fires off a final rejoinder that circles around to the very beginning of the Marvel timeline, delivered pitch-perfect: "And I. Am. Iron Man."  Then he snaps his fingers and dusts Thanos' entire army, and the Purple Chin-Rake himself.

(Which, it seems to me, indicates that the Infinity Stones respond to the will of whoever is using them at any given time, since Tony's Snap didn't reverse-reverse the reverse Snap and re-dust half the universe, along with only 50 percent of Thanos' army. Plot conveniences are wonderful things, aren't they?)

Of course, this results in Tony's sacrifice. But that isn't the first, nor the worst, sacrifice in this film. I can actually buy Tony's laying down his life, since his character came full circle (kinda-sorta) from the narcissistic, self-absorbed asshole he was in Iron Man. Well, he still was a narcissistic, self-absorbed asshole, but living with Pepper Potts and becoming a father settled him down just enough to let him do what he did. So I can live with Tony Stark's fate.

His fate, however, does not compare to the dirt done to Natasha Romanoff.

Again, y'all should already know that there's more than one death in this film, and this one, as far as I'm concerned, is entirely unjustified. Hawkeye and Natasha (and wasn't that an obvious setup), were the team sent to fetch the Soul Stone, the one stone that requires a blood sacrifice (someone the wielder loves) to gain it. Hawkeye and Nat battle on the edge of the cliff for the dubious privilege of being the one to hurl themselves over, and Natasha wins. This inspired instant outrage in some quarters, with predictable pushback: "Well, Hawkeye had a family. He should be the one to survive, for them."

Stop. That. Shit. Right. Now. Clint Barton is not more valuable than Natasha Romanoff because he reproduced and she didn't. With that ridiculous objection out of the way, the only question that should be asked is: What have each of these characters been doing to show which one deserves to capture the Soul Stone?

The movie itself provides the answer. In the five years since the Snap, Hawkeye has turned into a one-man vigilante murder crew, offing people he considers to be Bad across the globe. I will bet you any amount of money that if each of those deaths was examined, there would be more than a few innocent people in the mix. What he's done is remarked upon for a few minutes at the beginning of the movie, then pretty much forgotten as soon as he's brought back into the Avengers fold. (One also wonders if, following their resurrection, he told his wife and children what he did while they were gone.) On the other hand, Natasha has been partnering with Steve Rogers for five years leading what's left of the Avengers, and helping people to deal with the losses inflicted by Thanos.

This alone qualifies Natasha Romanoff to bring back the Soul Stone, and Clint Barton to throw himself off the cliff. (I'm sure if this had happened, Pepper Potts would have seen to it that Hawkeye's family was supported financially for the rest of their lives.) This was a horrid decision by the filmmakers, in-universe as well as -out. The optics of sacrificing the only original female member of the Avengers, even if she subsequently gets her own movie, are not good, to put it mildly. This is the main reason I'm not going to buy my own copy of this movie, and why I probably won't watch it again, either. Natasha Romanoff did not deserve to be shat upon, and I'm not going to part with one red cent to the people who did it.

So, I have very mixed feelings about this film. It's certainly the end of an era for Marvel Studios. I can only hope in the upcoming Phase 4, Kevin Feige and crew handle their female characters (Captain Marvel in particular) better than they did this time around.