At the Movies: Terminator: Dark Fate 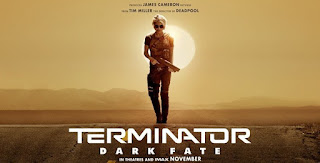 I chose this poster because this image is the heart of the movie, as it should be. In the first movie, and the second to some extent, Linda Hamilton was overshadowed by Arnold Schwartzenegger. In Terminator 2: Judgment Day (one of my all-time favorite films), the iconic image of Sarah Connor, bulked-up and deadly with her biceps and ponytail, has lingered indelibly in the minds of many women (along with Sigourney Weaver's Ripley) as a badass female action hero who has no regrets and takes no prisoners. Hamilton did not appear in the next three movies, and Terminator Salvation killed her off in favor of Christian Bale's scenery chewing. Genisys, the soft reboot with Emilia Clarke, both made me long for Drogon to swoop in and flame the day and made clear that any movie without Linda Hamilton, even if Schwarzenegger is present, is not a true Terminator movie.

Some have blasted it as being a retread, and in one sense it is--it does have to follow the already established formula. We won't get into the absurdities of this universe's time travel, as they make no sense. The only way to even kinda-sorta reconcile the paradoxes is to subscribe to the multi-branch theory: the act of time travel in and of itself creates a separate timestream. In this film, Skynet was indeed defeated in T2, and that future withered on the vine. Unfortunately, the nasty sentient AI rears its head once again, in the form of Legion, an AI built for cyberwarfare that shut down civilization once it gained sentience and started the entire machines-hunting-humanity scenario all over again. (One wonders exactly what sort of malcontents are building and programming these AIs, as inevitably the first thing they do once they gain self-awareness is try to wipe humanity off the face of the earth. Also, I guess there must have been some cross-pollination of the timestreams, as the mechanism Legion uses to vault its Terminators into the past is the same, or very similar to, the one Skynet had. Still, don't make your brain hurt by trying to come up with a logical explanation for any of this.)

The difference that immediately defines this entry in the series is the very first scene. After a snippet of T2 recapping the story, we move to 1998, and Sarah and John Connor on the beach in Mexico. They're laughing and happy, thinking they're home free, when lo and behold another T-800 pops into existence, strides across the sand, and.... 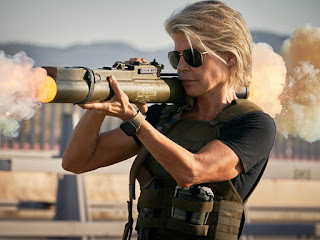 .....kills John right in front of a horrified Sarah.

This is a bold stroke that immediately makes clear the point of the story, which should have been evident from the get-go. For all the Ah-nuld hype and quips (and he gets in some zingers in this film, with a perfectly timed deadpan delivery), this is not his movie or his series. It never was. This is Sarah Connor's story, and this movie drives that home, even if another Terminator movie never gets made (as is probable, it seems, from the film's disappointing box office).

There follows the usual running, fights, and final climactic showdowns, with another important difference: Legion's new target, and the champion sent by the resistance to act as a protector, are both women. The latter, Grace, is an "augmented" supersoldier from the future, and the former is Dani Ramos, the young woman of color who, as it turns out, is not destined to give birth to the leader of the Resistance--she is the leader of the Resistance. Even Sarah doesn't realize this right away, understandably so.

Arnold doesn't make his appearance until more than halfway through the movie. Our triad of Dani, Grace and Sarah make their way to his ranch in Laredo, Texas, where he is living a quiet life as "Carl," owning his own drapery business and living with a Latino woman and her son (although not in a physical relationship, as he explains. I'm glad. That would have been icky). In the twenty years since he killed John Connor, he has, as he says, "grown a conscience," to the point that whenever he senses the (technobabble) "chronomatic displacement" that comes as each of Skynet's previously dispatched Terminators pop into the timeline, he texts the location to Sarah, and she goes and blows them away. (How she gets the money to do this or even live off the grid, as she is a wanted fugitive in all 50 states, is left unexplained, unless "Carl" is also texting funds to her bank account. Again, don't think about this too much.) Sarah nearly blows a gasket when she sees Carl, but Dani, who is starting to assert herself and shows us a glimpse of the leader she will eventually become, manages to talk her down. They decide to set a trap for the new Terminator, luring him into a "killbox" and using an EMP to shut him down.

(One thing I definitely miss in all of this is Robert Patrick's T-1000. That marvel of special effects in T2 still holds up today, and Gabriel Luna suffers by comparison. The way they try to make up for it in this film, turning Luna's Rev-9 into a black-goop Terminator who can split itself in half, separating the metal skeleton from the flowing goop, doesn't really work. Luna doesn't have Patrick's unstoppable icy malevolence, either.)

The final showdown occurs inside Hoover Dam, after aircraft chases and a lot of murky underwater scenes, and both Grace and Carl end up sacrificing themselves to save Dani...only in Carl's case, it's not so much for Dani as "for John," as he tells Sarah when he dies. And thus we come full circle, with Sarah Connor the mentor to the future leader of the Resistance (as apparently this timeline's destiny with Legion is still on track), driving away to prepare for her fate.

I can't imagine Dani having a better teacher.

This film is not perfect. But I loved this movie anyway, because of one thing: it gets Sarah Connor, and it gets her right. I suppose this must be attributed to the return of James Cameron, who evidently talked Hamilton into reprising her role. I'm also glad Schwarzenegger was reduced to supporting status. This would have had to happen anyway, since the dude is 70, but fortunately they resisted the temptation to de-age him in all his scenes as they did in the first. (And no one thought to, or had time to, comment on the fact of a Terminator getting wrinkles, thickening in the middle, and growing a bit bald.) This is the end of Skynet's Terminators (one hopes, anyway), but it is not the end for Sarah Connor--and her story has a wonderful, satisfying conclusion, as befits this groundbreaking character. 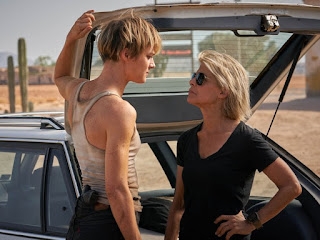 Very good review. I agree with it. I waited until I had seen the film before reading your thoughts on it. I made the assumption that Sarah Connor had money stashed aside from her younger days to fund her terminator hunting but it pays not to think too much about the finer details.

It is one of the better Terminator films IMO.