This episode of Discovery continues with this season's modus operandi--good characterizations and acting, and poor plotting. Yet this is enough for me to continue with the show, because when the first two are there, they are firing on all cylinders.

In this episode, that was never more evident than when it came to this guy. 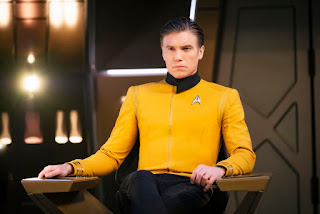 Anson Mount has been doing great work all season, and this episode had a scene that more or less left me in a blubbering mess. Since the time suit was sucked back into the future in the last episode, Starfleet has decided they need a time crystal to save all sentient life, and the Klingon planet of Boreth (where we saw Ash Tyler and Klingon chancellor L'Rell drop off their secret baby) has a monastery where the crystals are kept with the monks. (Yes, yes, it makes no flipping sense. Just put your logic blinkers on and go with it.) L'Rell and Ash get into a fight over who gets to go down to the planet--since, after all, Tyler/Voq is supposed to be, you know, dead (although that's not a terribly important barrier, in this show)--and Pike volunteers to go instead. Once he gets there, he meets a hooded albino Klingon monk who says he will give Pike a crystal if he looks into the future one shows him and accepts his fate.

(An albino Klingon monk, guarding crystals that do funky things with time! Ooooh, who could that be? It's L'Rell and Ash's kid, all grown up! Which makes me question the "kindness" of bringing him to Boreth, since at this rate he'll be in the grave even before Discovery starts its third season.)

And we the audience know what Pike is going to see, just as we recognize the fate that's been hanging over him the entire season. His accident is shown in all its horror, and the aftermath of him sitting in his chair in paralyzed agony, and even though we know it's coming, it's a brutal gut punch. Anson Mount just kills it here, because he looks at that future and sees what is in store for him, but as a Starfleet officer he steps up and accepts it anyway.

Damn, I almost think I'd rather have another season or two of Christopher Pike (and Spock and Number One) aboard the Enterprise than the new Picard show.

In the opposing storyline tackling this episode's themes of destiny and fate, Burnham and Spock hie off together after a Section 31 ship that missed its check-in (after some more sibling banter: "I don't need saving, brother!" "Shall we, sister?" when Spock, acting on Saru's orders, insists on going along). The two have a lovely conversation, and Michael is depressed and cynical, since nothing they have done has defeated Control. Spock admits that both logic and emotion have failed him, and the only thing he has left is a sense of purpose. Then they come upon the crew of the Section 31 ship, drifting dead in space after an apparent venting, and rescue the sole survivor, a former crewmate of Burnham's from the Shenzhou.

(ALL TOGETHER NOW: "Are you sure about that, Michael? Who IS this guy, really? Should we maybe not trust him quite so fast?")

Neither Spock nor Burnham hear me yelling at the screen, however, and the three of them beam aboard the Section 31 ship. And sure enough, the Lone Survivor gets Michael alone and tries to infest her with nanobots, resulting in a rather suspenseful scene where she keeps firing at the poor guy (although maybe not that poor, since he's already long gone and reanimated by Control) until she phasers a huge hole in his midsection and a stream of nanobots comes pouring out. And Spock, finally, comes running in and hits upon the idea of magnetizing them to the deck. Apparently Michael is the one "true threat to its [Control's] objectives," and despite its confident assertion that it will win, there must be one timeline out there (shades of the Avengers and Thanos) where it fails.

Back aboard Discovery, there is a nice scene involving the bridge crew eating lunch, including the welcome return of Jett Reno (and the Six Sinuses from the Black Lagoon guy, whose name I've forgotten). Stamets is also sitting with them, at least until Culber comes into the mess hall with a different group, whereupon Stamets rushes back to his engineering cave (this is a very brief scene, but it's another fine performance by Anthony Rapp). After this, Reno goes to sickbay with a hangnail excuse, and tells Culber to stop being an "idiot whose name rhymes with Poo." She relates how her wife died during the Klingon War, and she didn't get another chance; but Culber and Stamets have another chance, and she urges him not to screw it up. These scenes were a welcome break from the overall tension of the episode, and all I can say is MORE OF THIS PLEASE. Especially Jett Reno.

The episode ends on a cliffhanger, as after Spock and Michael's return to Discovery seemingly the entire complement of Section 31 ships, presumably controlled by Control (groan), pop out of warp around Discovery. Since they cannot delete the sphere data from Discovery's mainframe, Michael says they need to destroy her, and Pike agrees. He calls the Enterprise to come to their location (his ship is going to get there before the Section 31 ships, which are already there, can capture them? Really?), and gives the order to begin evacuation. (Just before this, there's also another nice scene where Pike relates what happened on Boreth, or at least part of it, and you can see just how devastated he is by what he has learned. More stellar acting on Anson Mount's part.)

The episode ends there, but now I'm wondering if this is going to connect with the excellent "Short Trek" shown on All Access before the season proper, called "Calypso." This depicts a Discovery 1,000 years in the future, abandoned by her crew and ordered to wait for their return, during which the computer evolved to sentience (and not a Control-inator type sentience, either). At any rate, next week at the very least we'll get to see the Enterprise again, and hopefully Number One as well.

So: parts of this I really liked, and parts had me screaming in frustration. I'm still holding out hope that Michelle Paradise, Season 3's new co-showrunner, will fix their plotting problems. They have an excellent cast and characters, if they could just get their damn storytelling straight.