So this is what this country has been reduced to. 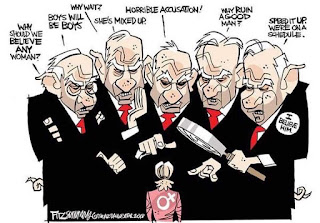 Even if Brett Kavanaugh we not creditably accused of sexual misconduct, his screaming, crying, out-of-control performance during the hearings disqualifies him in and of itself. (If he were a she, I daresay it would be called "hysterical.") He evidently believes that just because of his penis and melanin-free skin, he is entitled to sit on the Supreme Court, and woe to anyone who gets in his way.

If this were a movie, it might be called "The Last Stand of the Angry White Male." Because it is a last stand. Because young people were disgusted by the Republican Party's naked power grab this week, and hopefully they will rise up and vote. Looking back, I hope Christine Blasey Ford (and Julie Swetnick and the other women who have come forward), will be remembered as heroes. But I'm sad that revealing their pain, and dragging them through the mud, is the price that must be paid for excising the cancer that is spreading through this country.
Posted by Bonnie McDaniel on 9/30/2018