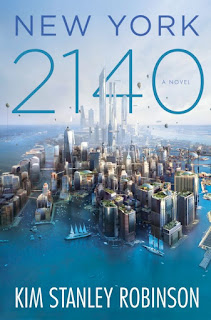 At 613 pages, this is one of those books you could use either as a doorstop or a weight for your workouts. I daresay it could keep your doors from slamming in the breeze, and also give you some pretty buff biceps. In my case, since I got it from the library, neither my doors, biceps or bookshelves will ever be in any danger.

Which is a roundabout way of saying that I wasn't terribly impressed by this book. It's not as bad as some other monstrosities I've slogged through (Death's End, I'm looking at you) simply because Kim Stanley Robinson is a better-than-average writer. The characters in this book are not terribly deep, but they are engaging for the most part, and even his thinly-disguised authorial rants (in the form of chapters entitled "a citizen," "the citizen," et al) are entertaining, snarky and very very meta. He writes some good action scenes--in particular the depiction of the hurricane hitting New York--and for such an enormous book, the story flows fairly well. In fact, the best character here is the richly imagined future city of New York, fighting back against the full unfolding of climate change and a fifty-foot rise in sea level.

I guess what finally got to me about this book is that I can't see any real point to it, other than Robinson's obvious wish to end global capitalism, destroy the financial sector as we know it (by nationalizing all the banks), and convert the United States (and the entire world, one assumes) to a socialist and/or populist utopia. While this may be a laudable goal in and of itself--and this is one facet of the book he's passionate about, as he gets deep in the financial weeds here--I certainly don't think it would go down as Robinson depicts it. (For one thing, in this future, conservatives/libertarians/the Republican Party don't seem to exist any more. Of course, one would hope that in the midst of the global climate change catastrophe they spent the previous century denying, they simply melted away from shame.) There is no real protagonist or antagonist, and after the financial sector has gone belly up and all those wonderful new high taxes, universal health care, free college, etc etc etc have been enacted, the story just sort of peters out. New York still exists, there are still a (very few) polar bears, and one gets the impression that humanity will keep muddling through, despite its own selfishness and stupidity.

This is okay, I suppose, but it's not particularly exciting for me as a reader. In the end, this book just doesn't push any of my buttons. And since I already have doorstops and free weights, I don't have any other use for it.