Hugo Reading 2018: My Favorite Thing is Monsters, by Emil Ferris 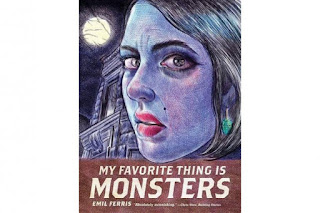 Apparently there's quite a story behind this book. The author, Emil Ferris, is in her fifties, and she had to teach herself to draw again after being partially paralyzed by West Nile virus. This is the first half of what is slated to be a 700-page doorstopper, and it's won countless accolades, including nominations for a Hugo and the industry's most prestigious awards, the Eisners.

All well and good. But I struggled to finish this. I thought it started out well--the artwork is like nothing I have ever seen before, modeled after ten-year-old Karen Reyes' sketchpad/diary, complete with background notebook lines. The story concerns budding sleuth Karen, who likes to pretend she is a werewolf girl (and draws herself that way in her sketchbook), clumsily trying to solve the murder of her upstairs neighbor, Anka Silverberg. It's set in 1968 Chicago, and one of the plot points is the assassination of Martin Luther King. There are several side plots, including the harrowing background of Holocaust survivor Anka that takes up most of the middle section. Karen's brother Deeze is involved in a sexual relationship with Anka, and Karen's mother is diagnosed with and dies from breast cancer. And the very last panel--or page, rather, since there aren't any "panels" in the usual comics sense--ends on a cliffhanger, revealing Deeze's identical twin, Victor, who Karen never knew existed.

Does this sound like a muddled mess? Unfortunately, it is. On the one hand, I can see why it's been praised and nominated for so many awards--it's genuinely something new and groundbreaking. On the other hand, I thought the story needed some severe tightening up, as it's not at all sure what it wants to be. Murder mystery, coming-of-age, coming-out (Karen very hesitantly admits to Deeze that she "likes girls"), Holocaust history, the American history of one turbulent flashpoint year? The storyline blunders through all of these subplots, and doesn't make much sense out of any of them. Plus, at 400 pages, it takes forever to get to what few points it manages to make.

Nope, this book sadly isn't for me. I'm very glad Emil Ferris managed to publish it--the author's background is actually more interesting to me than the book itself. But I won't be picking up the second volume.