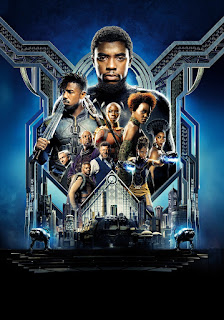 This is one of the best Marvel movies, along with Thor: Ragnarok. Huh! Marvel gave a couple hundred million dollars to two directors of color and let them tell their stories as they saw fit! Who da'thunk it?

Shuri. Ah, Shuri. I hope there's one scene in Avengers: Infinity War where Shuri goes head-to-head with Tony Stark and outthinks/outtechno-fies his ass.

Kee-ripes, will we ever get away from the overly CGI'd third act? Wonder Woman also fell prey to this, so it's not just a Marvel problem. It makes me appreciate the mostly practical effects of Mad Max: Fury Road even more.

However overly CGI'd, Black Panther's third act was pretty badass. General Okoye stopping the charging battle rhino was alone worth the price of admission. Not to mention Daniel Kaluuya's W'tabi asking her if she would kill her love, and her leveling that vibranium-tipped spear on him and replying, "For Wakanda? Without question."

Even though this is ostensibly a story about Chadwick Boseman's T'challa, in a lot of ways Lupita Nyongo's Nakia was its heart. She sees, before her king does, that Wakanda has a responsibility to humanity, and must begin to share its technology and knowledge with the outside world. (And, of course, this will be just in time, with Thanos barrelling towards Earth.)

This is a movie with a lot to say, and most of it is bound up in the ultimately tragic figure of Michael B. Jordan's Killmonger. His methods were atrocious, and he was not a nice guy and wasn't meant to be, but damn, he still had a point. Marvel had better ramp up the writing and motivations of all its villains henceforth.

If any superhero movie has a chance to win the Best Picture Oscar, I think it's this one. We'll have to see what happens after The Shape of Water's breakthrough.