Hugo Voting: Best Novelette (or, the Great, the Good and the Ugly) 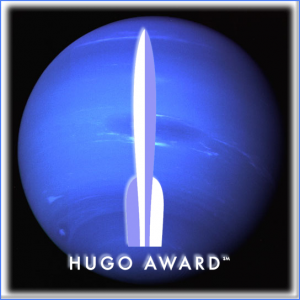 Now we've reached the Novelette category, defined as stories between 7500 and 17,500 words.

Let's get the ugly part out of the way first. The only reason there's an alien stripper, a T-Rex, and a lurid nastybone on the Hugo ballot is due to the petty spite of one Theodore Beale, aka Vox Day, who was thoroughly thrashed in an online altercation twelve years ago and has had a vengeful hard-on for John Scalzi, Patrick and Teresa Nielsen Hayden, and Tor Publishing ever since. He's tried to wreck the Hugos two years running, but due to new rules that took effect with this year's ballot, he's reduced to wanking out incoherent nonsense nominations like this one.

The one I feel sorry for (sort of) is Ms. Stix, who apparently doesn't realize she's being paraded around like a sacrificial goat for Mr Beale's ego. On the other hand, she could have turned down the nomination, so I can't find it in my heart to get too worked up over her inevitable loss.

We don't need to discuss the so-called "quality" of her story, do we? Yes, I did read it, just as I read John C. Wright's bovine excrement, and that's thirty more minutes of my life I need back. Suffice it to say that national treasure Chuck Tingle does this sort of thing far better, and has a niftier sense of humor to boot.

This is...okay. Not outstanding. It's the story of a daughter in search of her father, and her relationship with her mother, superimposed over what is essentially the background detail of the first manned Mars mission. The SF element is minimal. I suppose one could call this a "literary" SF story, but Ursula K Le Guin does it better.

4) "The Jewel and Her Lapidary"

This is quite a grim little story, of sentient gems that have power, of Lapidaries that wield and control their power, and who in their turn are bound to the Jewels, the rulers of the kingdom. The focus is on the last Jewel and Lapidary in the face of an invasion, and what each girl is willing to sacrifice for the other, and for their country. I liked it, but not as well as the top three.

3) "Touring With the Alien"

I nominated this. It's an extremely well written story, with some fascinating ideas about consciousness and self-awareness that remind me of the work of Peter Watts. The only drawback is the ending, and how much of a letdown that is depends on your point of view--if the main character is the betrayer of humanity, or not. The moral complexity of the ending is similar to the recent zombie film, "The Girl With All the Gifts" (which I thought was really good).

My top two stories are both desert stories, Southwestern stories, full of myths and legends, and gods and death. This one is the quieter of the two, with the rhythms of folklore, which is Ursula Vernon's trademark. Grandma Harken, the hero of the Nebula-winning "Jackalope Wives," returns, and the search for whatever is stealing her tomatoes turns into something of an epic quest, with avian shapeshifters, folded realities, and train gods. The world is fascinating.

I didn't care much for Alyssa Wong's previous story, but this one is firing on all cylinders. A large part of that is due to her skill in using a rather difficult POV--second person, present tense. (I've done it. It is not easy.) She creates an entire distinct character out of all those "you's," and I slipped into the skin of that character on her beautiful flowing prose. This is a bittersweet weird Western, with rattling bones and living deserts, and a young boy who sacrifices his humanity to give his dearest friend a chance for a good life. I thought "Wow" when I first read it, and I think that even more so now.

Next: Best Editors, Long and Short