So I imagine everyone has heard. The rock  n' roll band in Heaven has added another illustrious member. 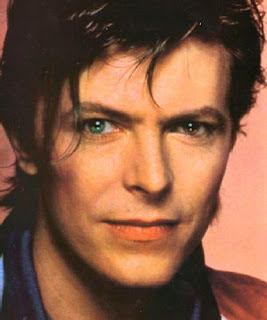 Everyone is talking about the music, of course. What I wanted to talk about here was his film work. He made quite a few movies, and two of them are favorites of mine.

The first, of course, was the wonderfully weird The Man Who Fell To Earth.


(Man, movie trailers were strange back then.)

Another highlight was the vampire film The Hunger, with Catherine Deneuve.

One of his best-known roles was Jareth the Goblin King, in Jim Henson's Labyrinth. At one of the places I frequent, we recently had a Best Fantasy Movie bracket, and Labyrinth finished quite high in the voting. (Although the movie didn't win, we agreed that "David Bowie's trousers" should have garnered some sort of Supporting Actor award.)

But my favorite role of Bowie's is Nikola Tesla, from the underrated Christopher Nolan movie The Prestige. This film has one of the creepiest endings I've ever seen. Not to mention the dueling eye candy of Bowie, Hugh Jackman, and Christian Bale.