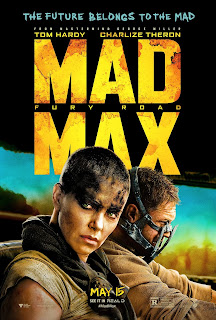 Yes, I know I'm late to this party. But what a helluva ride.

Actually, I enjoyed going into the movie having read all the spoilers. I knew what was going to happen, whose story is being told (hint: it's not Max's, as the poster above clearly illustrates. This was also signaled by the onscreen credits: Tom Hardy's and Charlize Theron's names appear together, but her name is higher than his. I guess this is part of why certain Mens' Rights Activists went apeshit), which specific points of awesomeness to look out for (re: the Vuvalini--I wish George Miller had gone all the way and called them the Vulvalini), and also what small character-building moments were to be found. There were quite a few of them for such a slam-bang action picture, particularly in the quiet middle section. I guess for the screenwriter-literate (which I'm not) that would be the second act. It was certainly a needed breather in between the parts that were cranked up to (h/t Spinal Tap) one hundred and eleven.

Seriously, this is the best freaking movie I have seen in years. I'll get it when it comes out on Blu-Ray, of course, but this really is a film that deserves to be seen on the big screen. This is due in no small part to the stellar editing of Margaret Sixel. (Here's a fascinating article about this. I don't expect either Margaret Sixel or Charlize Theron to be nominated for Oscars, but they effing well deserve to be.) With so many action movies, you can't keep up with what the hell is going on. I had no problems with this one.

Imperator Furiosa is, of course, a character for the ages, right up there with Ellen Ripley and Sarah Connor. There have been many many articles analyzing the film's feminist underpinnings, so I'm not going to go into detail when other people have said it so much better. I would like to make note of my personal "Fuck Yeah!" moment though:

The Vulva Vuvalini. Furiosa's original tribe, the one she was taken from as a child, and the half-remembered "Green Place" she is trying to get back to with the Wives.

This is a tribe of older women. Older women onscreen Doing Stuff and Being Heroes, not being shunted off to the side because they're not fuckable any more. Older women with gray hair and beautiful wrinkled faces, faces that spoke of decades successfully surviving in this horrifying new world, fighting and shooting and riding, and ultimately many of them giving their lives to see Max, Furiosa, and the Wives to safety.

I don't know if y'all have any idea how rare that is, how unexpected, and how lovely. Of course I knew about it from reading all the spoilers, but it still made me cry when they rode their motorcycles down the sand dunes to meet Furiosa. And the Keeper of the Seeds--I want an entire movie about her, dammit.

I liked the earlier movies (of course this was before Mel Gibson went nuts), with Thunderdome being my favorite of the three. Because of Tina Turner, naturally. Aunty Entity would be quite proud of Furiosa, I think. I also think that in many ways, none of which will be recognized come Academy Award time, this is George Miller's masterpiece.
Posted by Bonnie McDaniel on 6/07/2015