Wanker of the Day

Two nights ago, during the Constitutionally mandated applause-fest that is the State of the Union speech, (though veteran Scribe Charlie Pierce has pointed out that in past years, Presidents would send a simple report to Capitol Hill, and we wouldn’t have to go through all this televised meet-and-greet nonsense), this tweet drifted across my timeline. It must have been one of Twitter’s horrid Promoted Tweets, as I do not even follow the jackass known as Steve King. 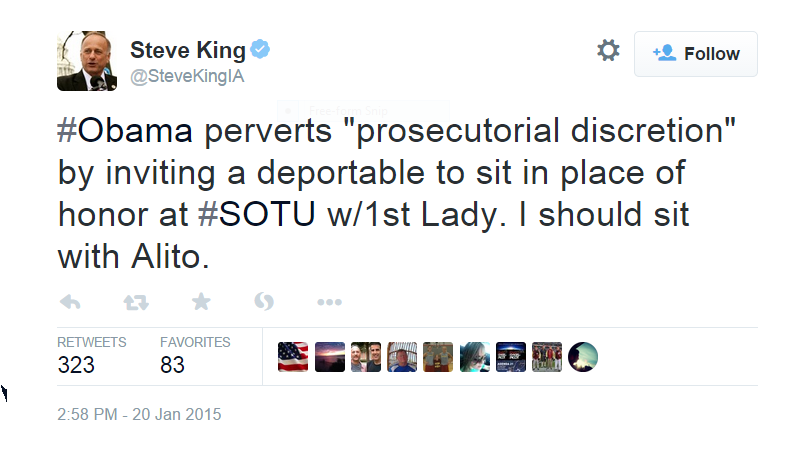 (And yes, you need to praise me, because I have now learned how to use the Snipping Tool! I did this just in case Mr. King or a member of his staff came down with a sudden attack of decency and deleted this abomination. Although, come to think of it, Congresscritter King would never succumb to such a thing.)

"Inviting a deportable." What a charming man, hey? Why, you’d think he was talking about a piece of furniture instead of a human being. One marvels that he didn’t go up to this person and ask about the size of her calves. Ugh.

Email ThisBlogThis!Share to TwitterShare to FacebookShare to Pinterest
Labels: immigration, state of the union, wanker of the day